The MediaTek Helio X20 doesn’t just have more processor cores than whatever’s in your current phone. As AnandTech notes, also one of the first chips from MediaTek to feature a CDMA2000-compatible modem, which means it could support Verizon and Sprint’s wireless networks. That could help MediaTek gain a foothold in the US market. 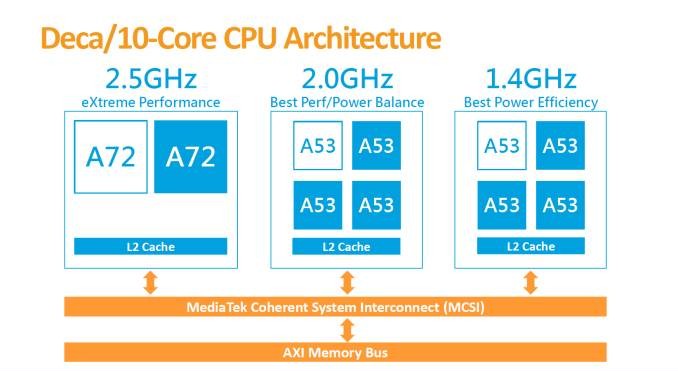 OK, but what about those 10 cores? How do they work together?

As expected, the Helio X20 uses a tri-cluster arrangement, with three different types of CPU cores designed to work together. There are:

The processor can use some or all of those CPU cores at any given time. When you need a performance boost, the chip can fire up all 10 cores. When you don’t need full performance it can rely on the slower Cortex-A53 cores for basic performance while conserving power and offering longer battery life.

If that sounds familiar, it’s because that’s how many of today’s ARM-based octa-core processors work. They just usually have two clusters instead of three.

MediaTek claims the chip offers about 30 percent lower power consumption than you’d get from a similar dual-cluster processor.

You’ll probably have to wait until early 2016 to buy a device with a MediaTek Helio X20 processor, but the chips should begin sampling in the second half of 2015.