Taiwanese chip maker MediaTek is the latest company to throw its hat in the quad-core ring. The company’s new MT6589 processor is expected to start showing up in tablets and smartphones in early 2013. 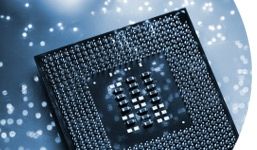 While MediaTek isn’t as well known in the West as competing chip makers such as Qualcomm, NVIDIA, Samsung, or Texas Instruments, the company’s chips have shown up in a number of Chinese devices… including some from major players like Lenovo.

Up until now most of MediaTek’s chips have shown up in low-end phones. The new quad-core processor is designed for higher-end devices such as Android smartphones and tablets.

Engadget ran some benchmarks on a smartphone powered by the new chip, and it didn’t score as well as devices with NVIDIA Tegra 3, Samsung Exynos, or Qualcomm S4 quad-core chips. But the scores were still pretty respectable.

The Mediatek MT6589 is a quad-core chip based on an ARM Cortex-A7 design. The graphics and cellular functions are all on the same chip. At launch the processor will support 802.11n WiFi, Bluetooth 4.0, GPSS, FM radio, and HSPA+, but All Things D reports a 4G LTE model is expected to launch later next year.