It’s called the Measy U4B, and Geekbuying reports it’ll be available in May for under $100. 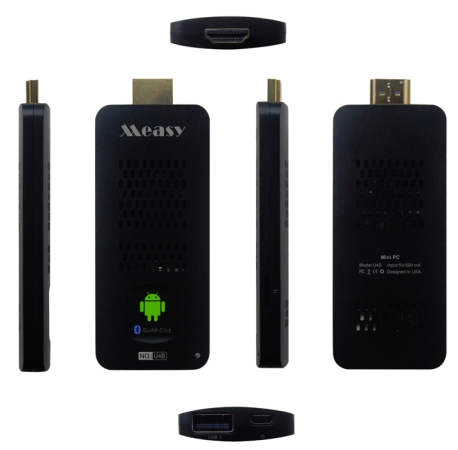 Like other Android TV sticks, the Measy U4B looks like a chunky USB flash drive. But instead of plugging it into a computer, it has an HDMI connector which you can plug into your TV. Then attach a power supply and keyboard, mouse, or remote control and you can run Android apps on your TV.

This model has some of the best specs available on an Android TV stick, including , 8GB of storage, 802.11n WiFi and Bluetooth 4.0.

It’s powered by a Rockchip RK3188 ARM Cortex-A9 quad-core processor, which outperforms the NVIDA Tegra 3 and Samsung Exynos 4412 in benchmarks.

The stick also features a microSD card slot for extra storage, a microUSB port for power, and a full-sized USB port for peripherals.