The Measy U2C is an Android TV stick with a Rockchip RK3066 dual core processor, 1GB of RAM, 8GB of storage, and Android 4.1 software. But there are two things that really set it apart: The built-in mic and camera, and an upcoming optional docking station that makes the camera easy to use (and which adds extra ports.

GeekBuying sells the Measy U2C for $75, and plans to offer the docking station later later this month after Chinese new year. 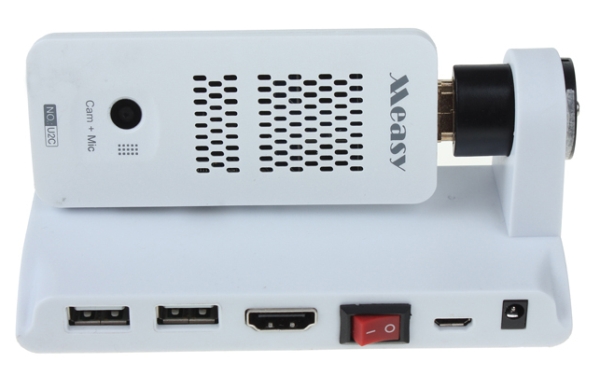 CNX Software has some initial impressions of the Measy U2C, and reports that the camera works well enough for Skype or other video chat applications.

The problem is that unless you have a TV with an HDMI port on the side, you’ll probably end up plugging this stick-sized computer into the back of your TV where the camera is pretty much useless.

That’s where the dock comes in. It connects to an HDMI cable and then sits in front of your TV, or just about anywhere else your cable can reach. This lets you point the camera at your couch when you want to sit back and make a video call.

You can also use the dock to attach a mouse, keyboard, storage or other peripherals thanks to the USB, HDMI, and SD card slots.

According to CNX Software, the Measy U2C has great WiFi performance and support for video playback in a range of formats, but the software that comes with the tablet doesn’t appear to be all that stable yet.

This isn’t the first Android TV stick we’ve seen to feature a built-in camera. The Kimdecent B12 also has one, and there’s some evidence that the two devices actually use the same system board.