Microsoft says Windows 10 represents a new stage for its flagship operating system: the transition to Windows as a Service. This means that the company plans to treat Windows 10 as a platform that evolves and grows over time… but that only works if users regularly download and install software updates. That’s at least one of the reasons Microsoft is changing the way the Windows Update service works.

Automatic updates will be enabled by default for Windows 10 Home users, while Windows 10 Pro and Enterprise users will be able to postpone or disable some updates… at least for a while.

But it turns out there may be a way for Windows 10 Home users to block at least some updates. 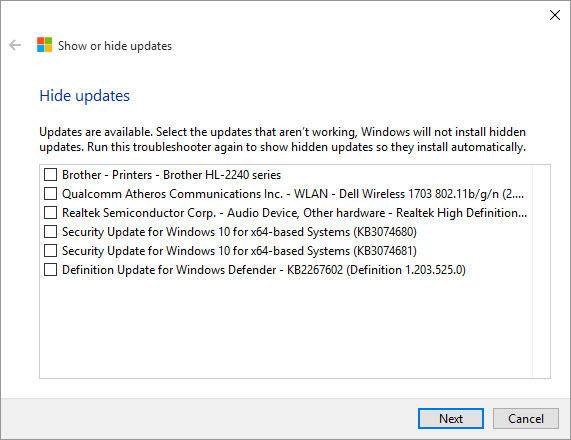 For the most part, automatic updates are a good thing. Microsoft can use them to quickly send security improvements and bug fixes to users.

Every now and again an update goes wrong though. It’s not entirely unusual for users to complain about updates breaking support for graphics cards or other hardware.

Worried that you might get one of those updates that breaks things rather than fixing them? ZDNet reports that Microsoft appears to have a solution.

While the Windows 10 Software Update utility doesn’t include a built-in option to disable updates, there is a troubleshooter package that may let you block or hide updates. KB3073930 is a package for “Show or hide updates.”

Download and run the package and choose the “Hide updates” option to see a list of available updates. Then check the boxes for any that you do not want to install, and they’ll disappear unless you decide to “show” them at a later date.

ZDNet’s Ed Bott also points out that System Restore is disabled by default in Windows 10. But if you re-enable it, Windows will automatically create a restore point before installing updates. This will make it easy to roll back your software if you end up installing a package that causes problems with your system.

If you’ve got a computer with ample amounts of disk space, it might be a good idea to turn on System Restore functionality so that you don’t have to go through the process of postponing and selectively installing updates.