One of the coolest features of Windows 10 for phones is that it lets you use some phones as desktop PCs. Connect a keyboard, mouse, and display and you can interact with apps on a big screen, complete with task bar, start menu, and keyboard shortcuts.

But there are a few caveats — and the biggest is that right now you can only run Universal Windows Apps from the Windows Store in desktop mode. There’s no support for the millions of legacy apps written for older desktop-centric versions of Windows… at least not yet. 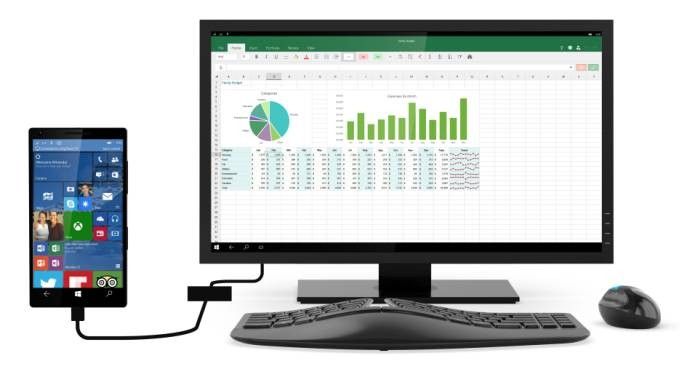 Speaking to developers this week, Microsoft’s Kevin Gallo said the company is looking into the possibility of allowing Win32 apps to run on phones with Continuum.

It’s not a done deal… and it’s not entirely clear how this would work if Microsoft does add support for Win32 apps. Right now the company is encouraging developers of legacy Windows apps to add code that will convert them to Universal apps that are capable of running on phones, tablets, and desktops. You’ll probably get the best experience that way, since the apps will have native support for mobile processors, screen resolutions, and touch input.

But there are many apps that will probably never be ported to the Universal Windows App platform for one reason or another, and allowing phones to run those apps could go a long way toward making your phone the only computer you really need. Use it to run mobile apps on the go. Dock it to a monitor and use it to run desktop apps at home or in the office.

Right now most mobile phones feature ARM-based processors, while most older Windows programs were designed for x86 chips. That means you’d probably need some sort of chip architecture emulator to run those apps on a phone like the Lumia 950 XL, and that could cause some software to run even more slowly than you would expect it to on an device with a low-power processor.

It’s possible that Microsoft could be waiting for new chips that are powerful enough to handle the emulation better… or that Win32 support will only be available in upcoming smartphones with Intel chips. Or maybe Microsoft has some other ideas in mind.

For now, that’s all they are… ideas. The company hasn’t committed to Win32 support for phones. Gallo just says it’s something Microsoft is looking at.