The Maui Project has been developing a set of free and open source apps and tools for a convergent computing experience that allows you to use the same apps on a Linux phone that you’d use on a Linux desktop computer. 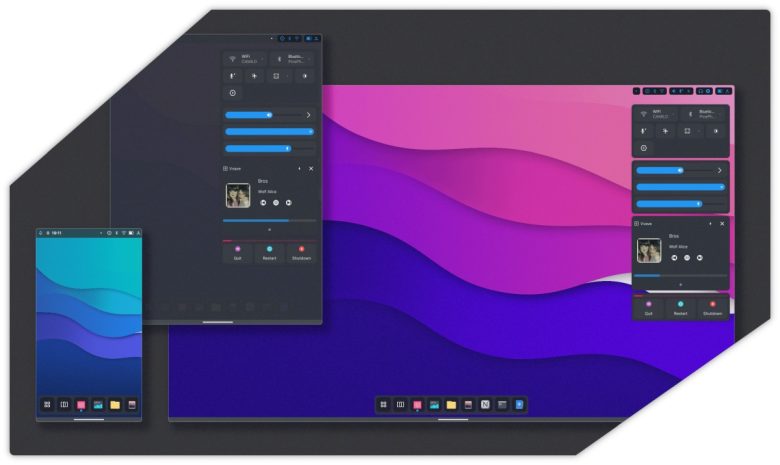 Maui Shell is basically a complete user interface that includes a desktop, app dock and launcher, top panel, and notification and settings pop-ups. What makes it unusual is that the whole thing is designed to scale to fit small touchscreen-only devices like smartphones as well as big-screen, keyboard-and-mouse devices like desktop computers as well as everything in between.

It’s still very much a work in progress and the early builds lack some key features like support for multiple displays, a session manager, or Settings center. Other features are still works-in-progress that may be rough around the edges, including the dock, panels, launcher, virtual workspaces, network toggles, drag-and-drop support, and PulseAudio and Bluetooth functionality.

But the project looks very promising. Developed by the folks behind the NitruxOS GNU/Linux distribution, you’ll be able to try out a preview of Maui Shell in the next release of Nitrux, where it will be available as an optional alternative graphical session.

Maui Shell has two main parts: a shell container called Cask and a compositor called Zpace. Among other things, the Cask Shell includes:

When viewed on a laptop or desktop computer, the launcher pops up just above the dock, the top panels are designed to react to mouse input, and maximized application windows won’t cover the dock.

Maui Shell will automatically adapt to other form factors though.

On a tablet the launcher, panels, and application windows will open in full-screen by default, although you can also arrange two applications to be displayed on the screen at once, either side-by-side or with one stacked on top of the other.

And on a phone, everything opens in full-screen, single-window view by default. If there are too many items in the Dock to be displayed at once, you can scroll through them with a finger or mouse. And while you can still slide down from the left or right sides of the top panel to open notifications or quick settings, respectively, when you do they’ll take up the full screen.

The Zpace compositor handles the positioning of windows and workspaces. It uses the Qt Wayland Compositor API and like everything else Maui-related, it’s designed to scale to different types of devices:

You can find more details (including additional images and some demo videos) in the Maui Shell announcement, or check out the source code for Maui Shell at GitHub.