The Matrix One is one of the cheapest Android tablets money can buy. But while it doesn’t have a high resolution screen or a super speedy processor, it actually doesn’t look all that bad for a $60 tablet.

Originally the company planned to sell the 7 inch tablet for $99, but the price recently dropped to $59.99, which seems about right at a time when Amazon, Barnes & Noble, Google, and others are offering significantly better tablets for $199 or less.

Update 11/2/2012: Shipments have been delayed, orders have been suspended, and so far no customers have actually received any products. It’s a bit early to say if the Matrix One was nothing more than a scam, but if you were thinking of picking one up, you may want to look elsewhere for now. 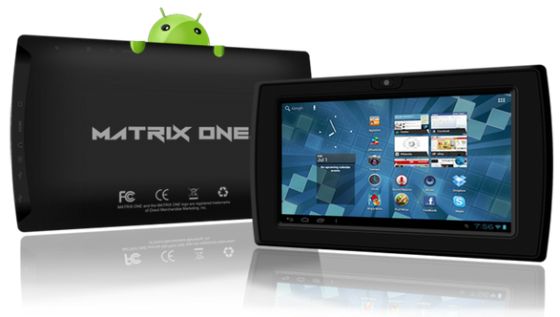 The Matrix One features a 7 inch, 800 x 480 pixel display with a 5-point multitouch capacitive touchscreen. It has a 1.5 GHz ARM Cortex-A8 processor, 512MB of RAM, and 4GB of storage, plus a microSDHC card slot for up to 32GB of extra storage.

There’s a front-facing 2 MP camera, a mic, gyroscrope, and accelerometer. The tablet has a full-sized USB port, a mico USB port, and a mini HDMI output. It has a 3200mAh battery and built-in WiFi.

The Matrix One runs Google Android 4.0.3 Ice Cream Sandwich, and it comes with root access enabled.

Matrix One says the tablet is compatible with the Amazon App Store, GetJar, and Google Play — although “compatible” doesn’t necessarily mean the device will come with Google Play preloaded. Maybe that’s why it ships with root — so you can install Google apps yourself.