Think Google’s $35 Chromecast is too expensive… or that the ecosystem isn’t open enough? Matchstick have developed their own TV stick which will sell for $25 when it goes on sale in February, 2015.

The Matchstick runs Firefox OS, allows you to fling content from a phone or PC to a TV, and supports many Chromecast-compatible apps out of the box.

There’s already a working prototype, but the Matchstick team hopes to raise $100,000 through a Kickstarter campaign to ramp up production… and early backers can reserve a Matchstick device for as little as $12.

Update: The MatchStick has failed to meet its ship date, and the developers have promised to refund money to backers of the crowdfunding campaign. 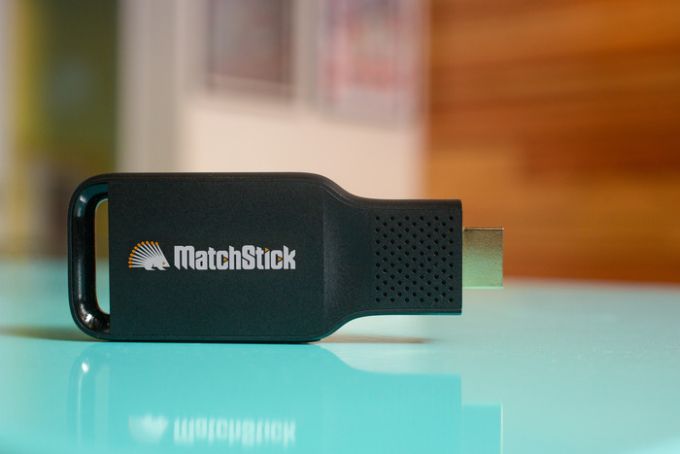 We got a first look at an early prototype in June, but now the team is providing more details, trying to build a developer community, and trying to raise funds.

Matchstick’s TV stick looks a bit like a Chromecast. You plug the tiny device right into the HDMI port on your TV and it’ll connect to the internet over WiFi.

Then you can fire up a phone, tablet, or PC to find content you want to send to you TV screen. Just tap the cast/fling icon and video (or other content) should start streaming to your television while you use your mobile device as a remote control.

Matchstick says it has sender apps for the Firefox and Google Chrome web browsers as well as support for Android or iOS.

Since the stick runs Firefox OS it’ll support many apps designed to run on other devices with the Firefox web browser. But you won’t have to hunt through the Firefox Marketplace to find compatible apps. They’ll show up in the Matchstick app store instead.

The team says there’s already support for a number of popular apps including Netflix, Pandora, ESPN, and HBO Go. Matchstick is also already compatible with many apps designed to work with Google’s Chromecast, and for Chromecast apps that aren’t already supported, all developers need to do is follow Matchstick’s instructions for recompiling their software.

The device is powered by a Rockchip RK3066 ARM Cortex-A9 dual-core processor and features 1GB of RAM, 4GB of storage, and 802.11b/g/n WiFi. It draws power from a micro USB cable, and supports 720p and 1080p video output.

Matchstick wants this project to be more open to hardware and software development than Google’s Chromecast… and the hardware designs and schematics are already available for download. Don’t be surprised if we start to see some Matchstick clones from Chinese vendors hit the streets before the official TV stick launches in early 2015.

3 replies on “Matchstick is a $25 Firefox OS-based, Chromecast-like TV stick”