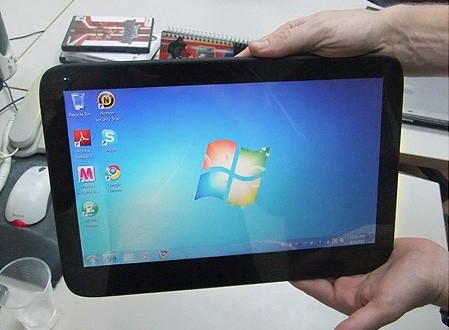 While Microsoft CEO Steve Ballmer says the Windows 7 tablets are coming… a lot of folks are starting to notice that some are already here. Heck, some Windows tablets have been around for 10 years, but those tend to be machines with built-in keyboards and high price tags. But a number of PC vendors in Asia have been pumping out Windows 7 tablets with an iPad-like look and feel for months. We just haven’t seen very many in the US yet.

Digitimes reports that Taiwanese PC vendors are focusing their efforts on tablets with ARM-based processors running Google Android. But we should see some machines with Windows 7 and Intel Atom processors coming from device makers “in small volumes to maintain their relationships with Intel and Microsoft , and also to gauge market demand.”

Meanwhile, Taiwanese PC builder Pegatron is showing off a new 11.6 inch tablet running Windows 7. It’s just a prototype at the moment, but the MasterPad features a 1.66GHz Intel Atom N450 processor, a 1366 x 768 pixel display, 2 USB ports, a 1.3MP webcam, a mini-HDMI port, 3G and WiFI connectivity, and a solid state disk. It weighs just under 2.2 pounds and should be able to run 5 hours on a charge.

Engadget reports that the tablet has an IPS display — which is the same type of screen used on the Apple iPad, known for allowing wide viewing angles.

As far as Windows tablets go, the Pegatron MasterPad looks pretty nice — although I suspect that if it’s sold in the US it will likely be rebadged and sold under a bigger brand name. Oh yeah… and the thing isn’t limited to running Windows 7. The company is also working on an Android version.

8 replies on “Masterpad tablet runs Windows 7, has an IPS display”