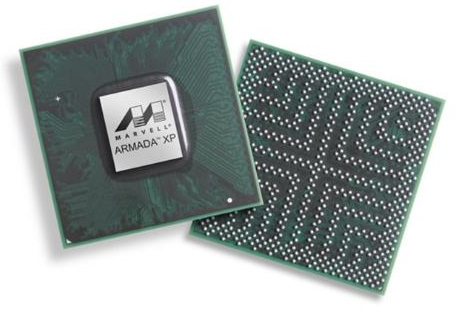 ARM-based processors are known for their low power consumption, not necessarily for their blazing-fast speeds. But these chips which are usually found in phones and low power machines like TV set-top-boxes are starting to catch up with the chips typically found in PCs. Today Marvell has unveiled its first quad-core ARM-based processor, which he company says is the “fastest ARM processor” available today.

The Marvell ARMADA XP chip features 4 separate 1.6GHz cores. You won’t find this chip in a smartphone or notebook anytime soon though. Marvell is targeting the ARMADA XP at “cloud computing applications” including web servers and networked attached storage drives.

The chip uses less than 10 watts, has up to 2MB of level two cache, and supports DDR2 and DDR3 memory. Marvell will show off the new chips at the ARM Technology Conference this week. The company is already sampling the ARMADA XP chips to customers.