Google’s $35 Chromecast device features a Marvell 88DE3005 single core processor, which is a less powerful version of the chip used in most Google TV boxes. But if that model number doesn’t exactly roll off the tongue, now chip maker Marvell is giving the processor a new name. 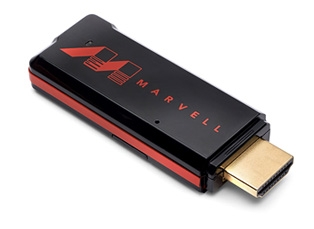 Marvell says the new chip is designed for low-power devices including TV dongles like the Chromecast, which you can use to stream internet video to your TV from services including YouTube and Netflix.

While the Google Chromecast is the first device to feature the new Armada 1500-mini chip, it sounds like Marvell is positioning it as a solution for other low-power media streaming devices.

That’s not a big surprise. When Google announced the Chromecast, the company said it was just the first product to feature Google Cast technology. Eventually the protocol could be built into Blu-ray players and other set-top boxes, allowing you to stream internet video to your TV while using your phone, tablet, or PC as a remote control even without a separate dongle like the Chromecast. It’s possible that Marvell’s Armada 1500-mini chip could be one of the processors that would be used in boxes of that type.