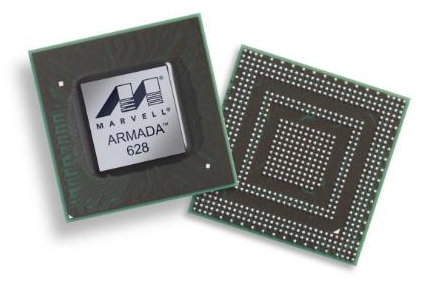 Sure, NVIDIA already has a dual core ARM-based chip for tablets, smartbooks, and smartphones, and Qualcomm is working on one of its own. But who needs a dual core chip when you can have a triple core chip?

One of the things that makes this chip stand out is how the three cores are arranged. There are two “high performance symmetric multiprocessing cores,” and a third core which is “optimized for ultra low-power.”

In other words, the third core kicks in when you don’t need the more power hungry cores to take action, for instance when performing routine tasks. So while you would think that a tri-core chip would use more energy than a dual core processor, Marvell claims the ARMADA 628 actually uses less.

The ARMADA 628 supports DDR3 memory and USB 3.0 connectivity. It can support DirectX, OpenGL ES 2.0 and Open VG 1.1. It can project images to 2 LCD displays simultaneously, or pump out HD video over an HDMI cable.

The chip supports Android, Linux, Windows Mobile, Adobe Flash, and RIM OS. Notice that the press release says “RIM OS,” and not BlackBerry OS… could that be an indication that this is the chip that will power RIM’s upcoming BlackPad tablet?