Odds are that the smartphone in your pocket is powerful enough to run some desktop apps like office suites, web browsers, and other productivity tools. But the software on most phones is designed for mobile devices, not desktop screens.

Microsoft is starting to change that with Continuum for phone, and Canonical’s Ubuntu “convergence” software could one day let you run both mobile and desktop apps on your phone (at launch, it’ll only be available on a tablet).

Now there’s a new player in this space: MaruOS is a custom build of Android designed to let you interact with Android apps on your phone’s screen. But connect a display, keyboard, and mouse and you can run Debian Linux. 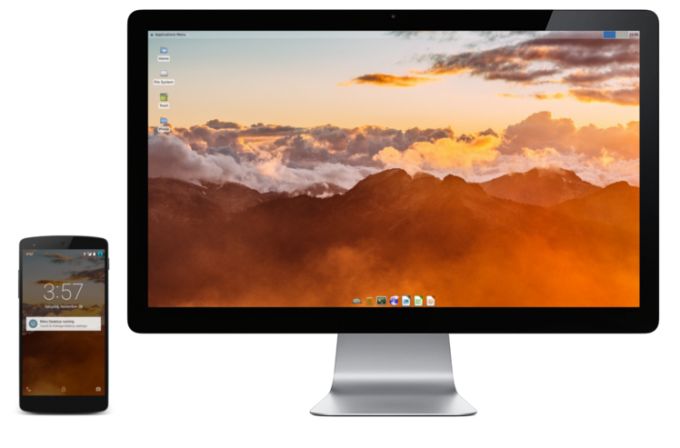 Right now MaruOS only supports the Google Nexus 5 smartphone, and you’ll need a SlimPort cable to connect your phone to a display (by plugging one end into the micro USB port on your phone and the other to an HDMI port on your TV or monitor).

You’ll also need to flash the ROM on your phone, wiping any data that’s already on it… so while I signed up for the beta and downloaded the MaruOS image, I haven’t actually installed it on my phone. I don’t have a SlimPort cable, and I don’t feel like doing a full backup of my device just to test out this software.

I’m no developer, but it looks like MaruOS does its magic using an app to detect when a display is connected and the LXC Linux Container tool that allows Linux to run alongside Android, allowing you to switch between Linux and Android environments. In this case, the Android user interface is displayed on your phone and Debian Linux is shown on your monitor.

There are a number of Android apps that let you do something similar by installing a Linux distribution using chroot, and then connecting to it via a VNC or remote desktop client. But if MaruOS pulls this off in a seamless way, it could deliver on a promise made by, and then abandoned by the developers of Ubuntu a few years ago.

There are discussions about MaruOS on Hacker News and reddit, but at the moment it doesn’t look like anyone has actually tested it yet.

Anyway, I guess what I’m saying is proceed with caution — but if you do try out MaruOS, let us know how it goes!

The installer that comes with the Windows download includes a script that walks you through the process of flashing the software on your device, an uninstall tool that will help you return to the stock firmware for the Nexus 5, and an Apache version 2.0 license notice for the adb and libadb.a files, but not much else. There’s also kernel, BusyBox, and LXC source code links on the MaruOS website.