Maru is a platform that lets you run Android on a smartphone, but connect the phone to a keyboard, mouse and display to run a desktop Linux-based operating system (Debian 8 Jessie, to be precise).

Developer Preetam D’Souza announced the project a week ago and opened up a beta program for Nexus 5 smartphone users. The goal was to get few beta testers… apparently thousands of people signed up… and a number of people have offered to help develop the software.

So he’s announced plans to relaunch Maru as an open source project. 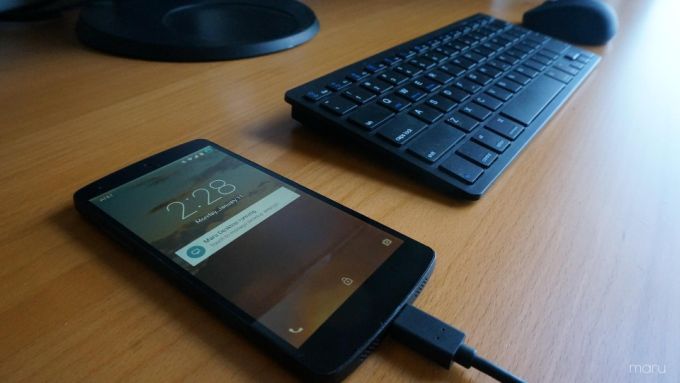 In the short term, that means development will slow down, but in the long term Maru could become a community-support product that supports far more devices and offers more features.

Maru isn’t just an app that you can download and install on a smartphone. Installing it involves flashing the custom firmware on your phone, replacing your current operating system. This should be familiar to anyone that’s flashed custom ROMs on an Android smartphone or tablet.

What makes Maru different is that the software also features an LXC Linux Container which allows you to run Debian Linux and run desktop-style apps when the phone is connected to a bigger display.

There are already methods for running Debian, Ubuntu, or other GNU/Linux distributions on an Android phone. But few have the same focus on actually turning your phone into a desktop.

The source code for Maru isn’t available yet, but D’Souza says he’s working on documentation and tools necessary to share the code. For now, he’ll be providing Maru v0.1a to some of the Nexus 5 owners that have already signed up for the beta.