The MangoPi MQ Pro is a single-board computer that looks like a Raspberry Pi Zero, but instead of an ARM-based processor, the MQ Pro is powered by a RISC-V chip.

MangoPi first announced it was developing the MQ Pro in January, and now it’s available for purchase in China for about $20. It should be available worldwide soon. 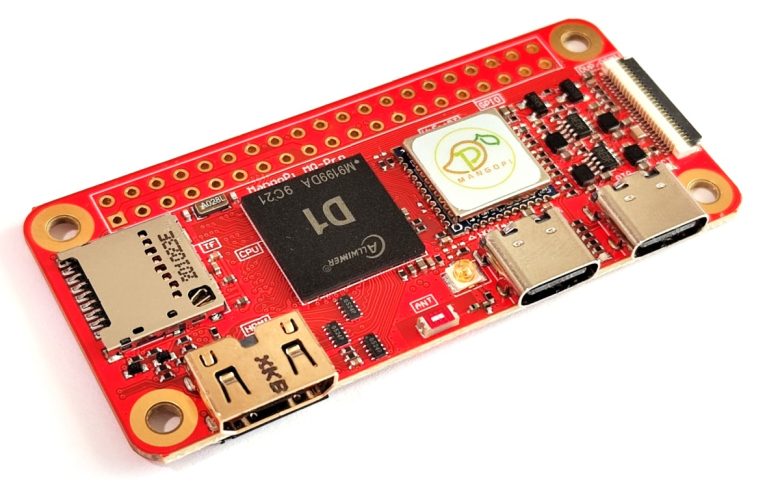 At the heart of the little computer is an Allwinner D1 processor, which is the same 1 GHz, single-core, 64-bit RISC-V processor we’ve seen used in other small cheap devices including the Sipeed Lichee and Nezha.

While that’s a pretty limited set of ports, the Mangopi MQ Pro could also work with carrier boards that will add features like full-sized Ethernet and USB Type-A ports.

MangoPi will offers versions of the MQ Pro with 512MB or 1GB of DDR3L memory, and the little computer supports WiFi 4 and Bluetooth 4.2 wireless connections.

There’s some documentation for the MQ Pro at the MangoPi website and the company’s GitHub page, including schematics, datasheets, tools, and suggested firmware (the board will be compatible with Tina-Linux, but as of early April, 2022 the firmware isn’t available for download yet).

The MQ-Pro will be MangoPi’s second mini PC with a RISC-V processor. The first was the even smaller 1.6″ x 1.6″ MangoPi MQ, which has an Allwinner D1s processor, 64MB of RAM, two USB-C ports, a microSD card reader, WiFi and Bluetooth, but no traditional video output port (although there is a 15-pin DSI FPC connector).

via Hackster.io and CNX Software

This article was originally published January 13, 2022 and most recently updated April 9, 2022.