Chinese computer maker Malata doesn’t get a lot of attention in the US, since as far as I can tell the company rarely sells any products in the States. But over the past few years Malata has come out with some of the more interesting mini-computer designs I’ve seen.

Now the folks at Notebook Italia have gotten their hands on Malata’s product roadmap for the next year or so, and it looks like the company has a number of new netbooks, tablets, and other computers planned. 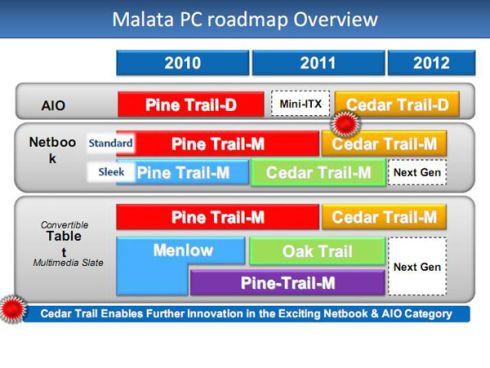 In the netbook space, the company will follow through with plans to release a super-slim 10 inch netbook based on Intel’s Canoe Lake reference design. There will also be a new 11.6 inch model with a slim design based on Intel’s Keeley Lake platform. Both laptops will use the upcoming Intel Atom Cedartrail platform.

Notebook Italia also has the run-down on a number of additional slim netbooks, with some models prioritizing long battery life, others emphasizing slim design, and several 3G-enabled models.

The company is also developing a netbook/tablet hybrid concept that looks an awful lot like the Dell Inspiron Duo.

On the tablet side, it looks like Malata has plans for a range of slate computers and convertible tablets — all of which will run Windows. That includes a model with a 9.7 inch IPS display and an Intel Atom Oak Trail processor, and several 10 inch models with Oak Trail chips including one with a 1024 x 600 pixel display and another with a high resolution 1280 x 800 pixel screen.