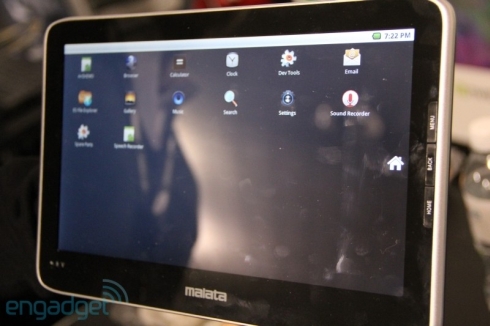 It looks like we can add a tablet to the relatively small list of devices sporting NVIDIA Tegra 2 chips. Engadget spotted a 10 inch Android tablet from Malata called the SMB-A1011 which has NVIDIA’s latest low power mobile chip.

If the Malata SMB-A1011 looks familiar, that’s because it appears to have an identical case to the e-Noah Interpad. Spec-wise, the tablet has a 1GHz dual Core Tegra chip, a 1024 x 600 pixel 10 inch capacitive multitouch display and a few Android buttons at the bottom of the device. It runs Google Android 2.2 and looks awfully nice — but Engadget reports that the build quality is a bit less nice, with poor viewing angles and a shoddy touch digitizer — although it’s not clear if that’s a problem that will affect all units or just the demo unit on display at a tech event today.