Some of the best smartphones on the market today have price tags in the $1,000 range. The MAKERphone costs just one tenth as much… but that’s only part of the selling point for this crowdfunded cellphone.

It’s a DIY phone that comes as a kit that you assemble. It’s programmable, allowing you to code your own apps or download and run existing software. And it comes with step-by-step instructions for putting the hardware together and learning to write code for the phone.

Basically it’s an educational kit for people who want to learn about hardware and software development… and who want to put that knowledge to work by building a phone they can actually use.

If everything goes according to plan, the MAKERphone will ship in March, 2019… although that’s always a big if with crowdfunding projects. 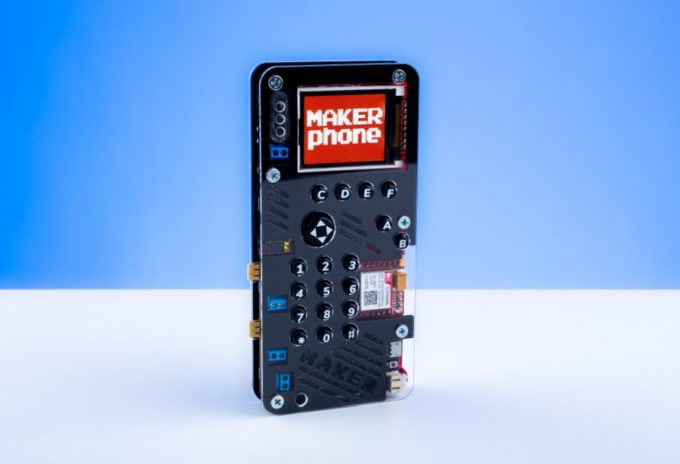 That said, this is the second crowdfunding campaign from the folks who created the MAKERbuino, a DIY game console that hit Kickstarter last year and shipped to most customers only a few months later than planned. It’s now available to the public for about $71.

Anyway, the MAKERphone is an upgrade over the MAKERbuino in a few important ways. It has a color screen, a dedicated digital audio converter (DAC) for MP3 playback, a real-time clock, better hardware components, and… support for 802.11b/g/n WiFi, Bluetooth 4.2, and the ability to connect to GSM cellular networks and make phone calls thanks to a micro SIM card slot.

There are still some gaming buttons, but they’re smaller and have to share space with a number pad. And there are also 8 programmable RGB LED lights on the back of the phone.

The MAKERphone kit consists of a circuit board, a case, microcomputer module (with a processor, WiFi, Bluetooth, and charging circuit), a 160 x 128 pixel TFT LCD display, a GSM module, a sound module, an amplifier module, and an antenna. It also comes with cables, buttons, button caps, and a 128MB microSD card pre-loaded with apps and games.

You can also buy an optional tool pack that comes with everything you need to assemble the phone, including a soldering iron, a screwdriver, and pliers.

In terms of software, the phone is Arduino-compatible, supports the Python and Scratch programming languages.

Can the MAKERphone do everything an iPhone XS or Google Pixel 3 can? Of course not. This thing doesn’t even have a camera. But you know what it does have? A 3.5mm headphone jack.

While the phone only has a 600 mAh battery, it also has a pretty low-power processor and display, so the developers say you should be able to get up to three days of battery life. You can charge the phone via a micro USB port when the battery does run low.

4 replies on “MAKERPhone is a $99 DIY, hacker-friendly phone (crowdfunding)”