Magisk v21.0 is still considered beta, and it may not work with all Android devices yet. But the software is available for download from the Magisk Github repository. 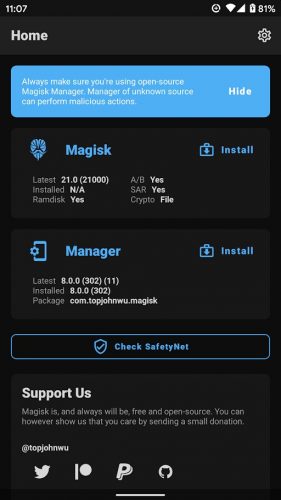 In addition to allowing you to root your device using MagiskSU, the utility allows you to install modules that alter the behavior of the Android operating system. For example, there are modules that can block ads, change camera features, alter system performance, replace your device’s stock emoji set, and much, much more.

You can find installation instructions and additional documentation at Github.

Android 11 support has been in the works for much of the year, with a “canary” build of Magisk released in April featuring initial support for the latest version of Google’s Android operating system. Now that it’s graduated to beta, Magisk v21.0 should be more stable and safer to use… although there’s always some risk involved with rooting your device, since not only does it give you more control over your Android phone or tablet, it also gives you more ability to accidentally break something (and may also leave your device more vulnerable to malware).