Tablets seem like they’d be a good fit for magazines. After all, they’re basically screens that you hold in your hands much the same way you would a magazine. But while Zinio, Amazon, and a few other companies have been offering tablet users tools to buy individual issues or subscribe to magazines, for the most part digital magazine sales are still pretty small.

So a group of publishers is trying something new. For $10 to $15 per month, Next Issue Media will let you access a range of magazine issues from its catalog. Next Issue is run by Time, Heart, Meredith, and Conde Nast, so while there are fewer than three dozen titles available at launch, they’re at least titles you’ve heard of, including People, Fortune, Sports Illustrated, TIME, The New Yorker, and Vanity Fair. 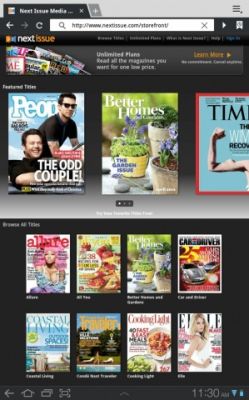 For $9.99 per month you can access all of the monthly and biweekly titles. If you want to read the weekly magazines you have to pony up $14.99 per month.

In other words, it’s like Netflix for magazines… except it’s more expensive than Netflix and has a much smaller selection.

You can also subscribe to individual magazines if you’d prefer. Prices range from $1.99 per month to $9.99 per month.

At launch the company’s app will only be available for tablets running Android 3.0 and up. Next Issue Media also plans to introduce an iPad app soon.

via TechCrunch and All Things D