Gaming accessory maker Mad Catz knows the PC gaming business pretty well, so the company made headlines this summer when it announced plans to launch its own Android-powered game console.  Now that the company has revealed the specs and price though, I’m kind of wondering why you wouldn’t just buy an Xbox 360… it’d save you about $50. 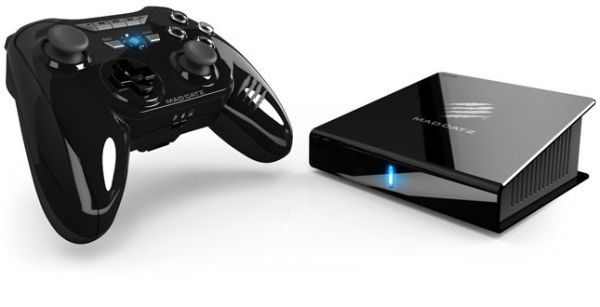 That’s about 3 times the cost of a GameStick Android game console or 2.5 times as much as an Ouya. To be fair, the Mad Catz M.O.J.O. has better specs than either of those devices, but there are far cheaper ways to play Android games on your TV.

The M.O.J.O. micro-console will be available “in limited quantities” starting December 10th. It’s already available for pre-order from the Mad Catz website.

You also get a mobile gamepad and HDMI cable.

The game console comes with the Google Play Store and NVIDIA TegraZone pre-loaded, which should make it easy to find games to play — and hopefully titles that are optimized for use with the NVIDIA Shield handheld gaming console or other devices with physical game controllers will work well on a TV screen. But most Android games are still optimized for touchscreen input, not a game controller.

Update: There’s at least one thing that helps set the Mad Catz M.O.J.O. apart from other micro-consoles. It’ll let you stream games from your PC to a TV, much the way you can stream them to an NVIDA Shield handheld device.