Mad Catz is dropping the price of its M.O.J.O. Video game console by $50, and the company has announced that the micro-console will support Ouya software in the coming months.

With this announcement, Mad Catz becomes the first partner to sign onto the new Ouya Everywhere platform, which brings the user interface, game store, and other features of Ouya’s own video game console to third-party devices. 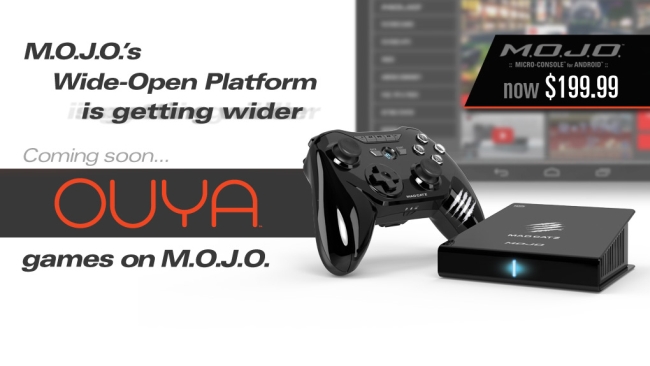 Ouya’s platform allows users to play Android games on a TV while using a wireless game controller. While many Android games are designed first and foremost for phones and tablets, all titles available from the Ouya Store are optimized for gaming on the big screen and for devices that don’t have touchscreens.

The Ouya team position their platform as a way to lower the barriers for game developers that want to create big screen experiences. It can take millions of dollars to develop an Xbox or PlayStation game. It can take dozens of dollars to develop an Android game. Ouya also makes it easy for users to try games — all games in the Ouya Store have at least some sort of a free trial.

What M.O.J.O. lacked was a user experience designed for televisions (and arguably, an attractive price tag). Instead it ships with a stock version of Android and support for pretty much any game from the Google Play Store, including games that don’t play well with gamepads and big screens.

This spring Mad Catz will add support for Ouya’s game store which should make the process of finding TV-friendly games a bit simpler. It also gives folks a new option if they like Ouya’s software but find the last-gen hardware limiting.