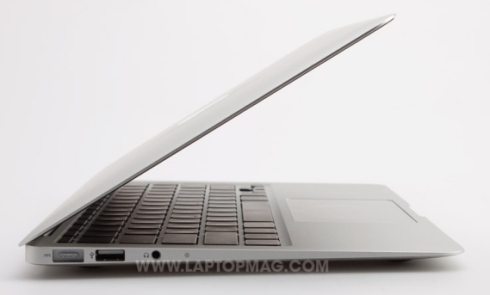 With a starting price of $999, it’s hard to call the new MacBook Air a netbook… if your definition of netbook is a small, cheap computer. But as far as Apple laptops come, the MacBook Air is probably the closest we’re ever going to get to a netbook. It’s smaller and lighter than a typical Apple laptop, and reasonably priced. The cheapest normal MacBook also costs $999.

The difference is the standard MacBook comes with a more powerful processor, an optical disc drive, and higher storage capacity. You have to sacrifice something if you want to release a 2.3 pound computer with instant-on capabilities for the same price, right?

But you can tell all of that just by looking at the specs. If you want to know how the new 11.6 inch McBook Air fares in real life, you’re in luck, because two respected news sites have already posted detailed reviews of Apple’s new thin and light computer.

SlashGear reports that the laptop has a full sized keyboard and the same huge multitouch trackpad found on larger Mac laptops… but the keys are not backlit. On the other hand, the computer actually scored lower on the Geekbench benchmark than the older MacBook Air which was released in 2008. To be fair, the new model is less than half the price, though.

Most importantly though, SlashGear reports that if you’re trying to decide whether to use an iPad or a MacBook Air as a mobile device, the Air wins if you need to run apps like iPhoto or the full version of iMovie. Heck, you could probably run Final Cut on the MacBook Air. Sure, it won’t be as fast as on a more powerful machine, but try doing that on an iPad.

Laptop Magazine reports the unibody aluminum case makes the MacBook Air feel much sturdier than most netbooks, which with a few exceptions are generally made of plastic. Laptop was also quite pleased with the display, suggesting that “you won’t find a brighter, cripser, or more colorful display on a notebook this class.”

Of course, if you’re not happy with the glossy display, Engadget reports that you can pay a company called TechRestore $249 to replace it with a matte screen.

Laptop also confirms Apple’s promise that the MacBook Air resumes from sleep in a split second, thanks to the speedy solid state disk. In fact, it only takes 15 seconds to cold boot OS X. The reviewer also managed to get over 5 hours of run time while surfing the web over WiFi, which actually exceeded Apple’s estimate by nearly 20 minutes. On the other hand, the fact that the Air has a non-replaceable battery could be troubling to some.

Overall, the MacBook Air looks like it might be just what Apple needs to convince loyal Mac fans to buy an ultraportable from Apple instead of building their own hackintosh netbooks. At $999, I’m not sure it will convince many Windows or Linux fans to trade up from a $299 netbook or a sub-$600 ultraportable from Dell, Asus, Acer, Lenovo, or other PC makers.