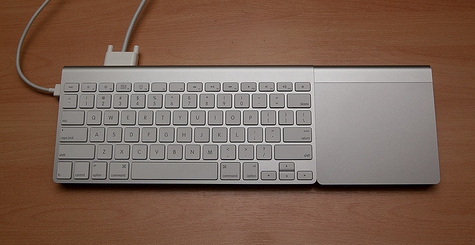 Like the idea of stuffing a computer into a keyboard, but underwhelmed by the Intel Atom processor and other netbook parts in the Asus Eee Keyboard? If you’re the adventurous sort you might want to follow in the footsteps of one brave hacker who is in the process of ripping apart a MacBook Air and stuffing its guts — plus an Apple Magic TrackPad into a keyboard case.

The end result should be a full fledged computer with a 1.6GHz Core 2 Duo CPU, 80GB hard drive, and OS X all in a keyboard. Think of it as an iMac, but with the computer hidden by the keyboard instead of the display.

Of course, this sort of thing requires a custom keyboard design, as most keyboard cases aren’t exactly big enough to house the guts of a notebook. So it’s not a project for the inexperienced. But that just makes it that much more awesome.

3 replies on “MacBook Air becomes a MacBook Keyboard… or something”