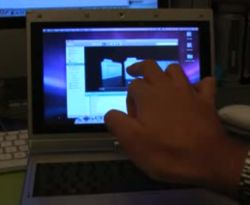 We’ve seen plenty of people install OS X on netbooks by now. There’s the Dell Mini Mac, the Lenovo IdeaMac S10, the Asus Mac PC, and of course, the MSI Windbook. But consider the game officially upped. Because one YouTube users has managed to successfully load OS X on a Gigabyte M912X.

The Gigabyte M912 series of computers have the same basic specs as many netbooks, including a 1.6GHz CPU, 1GB of RAM, and an 8.9 inch display. But there are two things that set the M912 apart from most other netbooks. First, it has a touchscreen display that can be folded down on top of the keyboard for using the PC in tablet mode. And second, the higher end models feature high resolution 1280 x 768 pixel displays which are much crisper than the 1024 x 600 pixel screens that you usually find on netbooks.

In other words, what this YouTube video shows is a tiny tablet PC running OS X. And running it pretty well. There’s an on-screen keyboard for entering text, and it looks like you can use a finger or stylus at least as well as a mouse for most tasks. This particulare Gigabyte M912X also apparently has an internal 3G wireless mod and dual boots OS X and Vista. Unfortunately the user who uploaded the vided hasn’t posted any instructions. But it’s probably just a matter of time before he or someone else posts all the gory details online.

You can check out the video after the break. And you can read more about the Gigabyte M912X and M912M in the Liliputing Product Database.