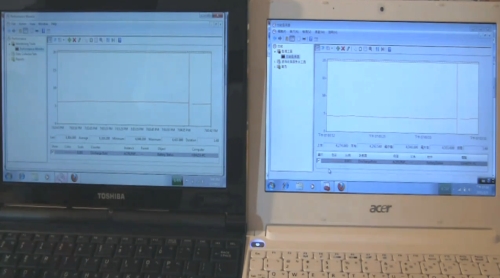 AMD introduced several new chips based on its low power Bobcat core this year. They’re all Fusion chips, which means the CPU and graphics are all on the same piece of silicon. The AMD Zacate E-350 chip uses 18 Watts and is designed as a low cost,  alternative to Consumer Ultra Low Voltage chips from Intel, but the AMD chips have higher performance graphics. AMD also produced a couple of even lower power chips designed to do battle with Intel’s Atom platform.

The AMD C-30 is a 1.2 GHz single core low power chip which gets decent scores in graphics benchmarks, but gets pretty poor marks in CPU performance. As far as I’m aware, no PC makers have plans to launch laptops with this chip in the United States.

The AMD C-50 is for all intents and purposes AMD’s answer to the Intel Atom. It’s a 1 GHz dual core chip with a TDP of about 9 Watts. I haven’t tested the chip yet myself, but from what I’ve heard, it’s not quite as fast as the Intel Atom N550 at basic computing tasks, but graphics are a different story. The C-50 can handle 1080p HD video playback and can handle 3D graphics acceleration, and DirectX 11, making it a decent option if you’re looking to play video games on your netbook or if you want to power a high resolution external display.

But does that extra graphics performance come at a cost? Sort of. Netbook News ran some power consumption tests to see how a Toshiba NB550D netbook with an AMD C-50 chip compared to an Acer Aspire One Happy with an Intel Atom N550 processor. At idle and while surfing the web, the C-50 had a bit of an edge. But the Atom chip used less power while watching videos and playing games. You can find detailed results at Netbook News.You can also check out a video after the break.

Overall, it’s nice to see that AMD finally has a chip for low price netbooks, especially one that offers something you won’t find in most Atom-based computers: a bit of oomph in the graphics department. But if you were hoping that the C-50 was going to absolutely blow away the Atom chipset in terms of battery life, power consumption, or overall performance, it looks like it’s more realistic to say that the C-50 offers an experience that’s similar to what you’d get from a netbook with an Atom chip and NVIDIA ION graphics.