The computer mouse as we know it has been around since the 1960s, although it’s gone through some major changes including the move from using a ball to track motion to using optical or laser technology and the shift in recent years from wired to wireless.

But the trackball actually predates the mouse by nearly two decades… and they’re still popular with folks who have limited mobility, since they don’t require you to move your hand, arm, and wrist as much as a mouse. Some folks without any mobility impairments also insist that they’re more ergonomic… but trackballs are a lot less common than mice.

In fact, PC accessory maker Logitech hasn’t released a new trackball in nearly a decade… but the company’s giving the trackball another go today with the release of the Logitech MX Ergo, which is now available for $100. 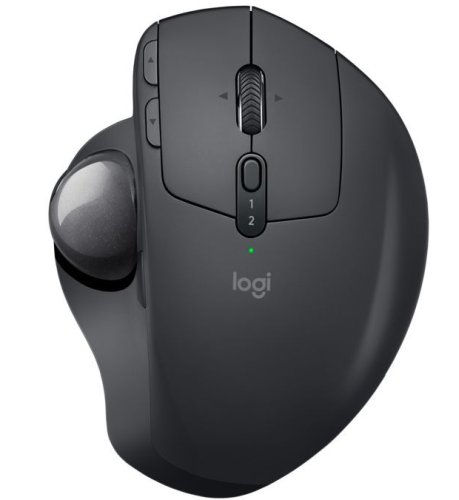 The new pointing device looks like a mouse, thanks to left and right click buttons, a scroll wheel, and other common features. But you control the motion of an on-screen cursor by moving the ball on the left side of the MX Ergo.

Logitech’s new trackball lets you adjust cursor sensitivity and speed with the press of a button, and the MX Ergo connects to your computer using a 2.4 GHz wireless dongle or Bluetooth. It can be paired with up to two computers at the same time, allowing you to do things like copy files or text from one computer to the next (with Logitech options Software installed).

There’s also an adjustable metal hinge that lets you tilt the MX Ergo at up to a 20 degree angle to make it more comfortable to rest your hand on for an extended time.

Logitech’s new trakcball mouse has a 500 mAh battery that should last for up to 4 months on a charge, but it can be recharged with a USB cable. The Logitech MX Ergo measures about 5.3″ x 3.9″ x 2″ and weighs about 6 ounces. It’s officially compatible with Windows 7 or later or macOS X 10.12 or later.