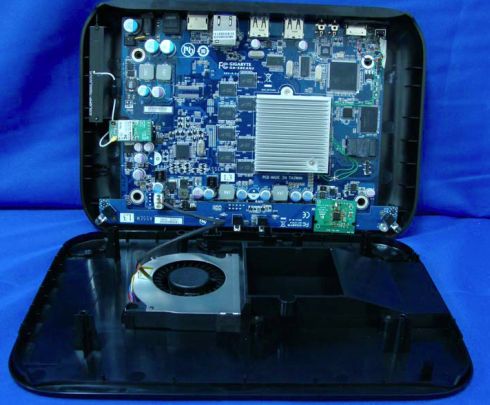 Logitech is one of the first companies planning to release a set top box that will support the upcoming Google TV platform. And it looks like LG is farming out some of the development to Gigabyte, because a Gigabyte filing with the FCC today seems to show the upcoming Logitech’s Google TV box. And to be honest, it looks a lot like a typical Intel Atom powered nettop with multimedia capabilities.

This should give hope to anyone who’s been interested in running the Google TV platform on PC hardware — or turning the Logitech Google TV set top box into a PC-like media center.

The device has a 1.2GHz Intel Atom processor and hardware acceleration for HD video and 3D graphics. There’s a large heat sink over the low power CPU, but there’s also a fan, so the box probably won’t be completely silent. There’s also a WiFi module and what looks like a few USB ports, an Ethernet jack, and possibly some other connections.