The Google Nexus 7 is a versatile little tablet that can run Android, Ubuntu, and potentially other operating systems. But you don’t have to wipe the stock Android software that comes with the tablet to load Ubuntu, CyanogenMod, or another OS.

Instead, you can use a new tool called MultiROM to load more than one OS on the 7 inch tablet and choose which one to boot every time you restart the Nexus 7. 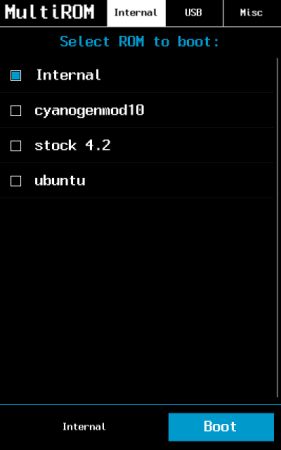 There’s a chance you could lose data or damage your device by messing with the boot sector and data partition — so proceed with caution.

But if you’re cool with that risk, MultiROM includes a boot manager and a custom recovery. You can install both without removing whatever software is currently installed on the Nexus 7. But once they’re installed, you can boot into recovery, choose the “Add ROM” option, and install an Android or Ubuntu image.

If you’ve got an 8GB Nexus 7, there’s not a lot of room to play with. But if you have a 16GB or 32GB model, that should provide you with plenty of space for a few operating systems.

The developer also plans to add support for booting from external storage devices such as USB flash drives or hard drives. Unfortunately the Nexus 7 doesn’t have an SD card slot, so booting from a removable flash card isn’t an option.