NVIDIA is introducing new technologies that the company says will bring more graphics horsepower to gaming laptops, while also extending battery life and enabling thinner and lighter designs thanks to next-gen Max-Q technology.

According to NVIDIA half of the new laptops set to ship with its new GeForce RTX 3000 series graphics will be available with displays featuring 240 Hz or higher refresh rates. 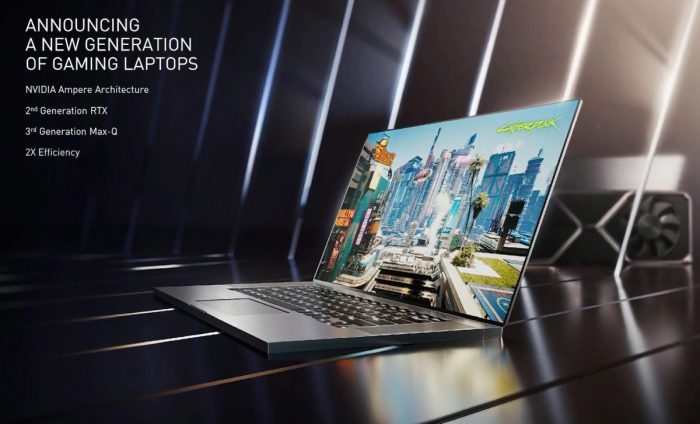 Here are some live updates in reverse chronological order (the newest updates are at the top):

Update: The event has now ended.

More than 70 gaming & studio laptops with NVIDIA GeForce RTX 3000 graphics are coming soon. The first should be available Jan 26th, with prices starting at $999. pic.twitter.com/ifkDtS2blI

While NVIDIA’s new RTX 3000 series mobile graphics are coming to gaming laptops, NVIDIA’s Studio drivers also enable them to be leveraged for faster for video editing, graphic design, and other professional/creative applications. pic.twitter.com/qf4LZPfFs1

NVIDIA’s new mobile flagship GPU deliver 100+ frames per second on laptops with 1400p displays, features 16GB of GDDR6 memory, and will be available in laptops priced at $1999 and up. pic.twitter.com/bbXyPZrRBi

NVIDIA says modern gaming laptops with its new GPUs are half the size, half the weight, and deliver 10X the performance of 4-year old model. The Lenovo legion Slim 7, for example, is 30-percent faster than a PS5. pic.twitter.com/NTdF7Pcv0P