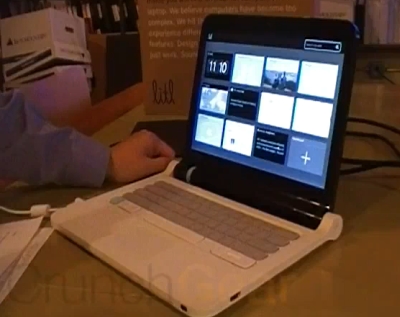 Still confused about the Litl Easel webbook? It’s an internet and entertainment-centric laptop that doesn’t behave like a typical laptop, even though it looks an awful lot like a laptop. The folks at CrunchGear got to sit down with the developers recently and they’ve put together a 16 minute demo showing just what the device can do. You can check out the video after the page break.

In a nutshell, the thing that sets the Easel apart is the operating system. Litl OS is designed to behave more like a TV or internet appliance than a traditional computer operating system. There are no folders or desktop shortcuts. Instead you have a series of “cards” that you can flip through to perform different actions. And every program opens in full screen mode.

In other words, it’s a dumbed down internet appliance that has the guts of a fully functional netbook, but which is designed to do less… not more. And for that, Litl wants to charge $699, or about twice the price of a typical netbook.

Is it worth it? I guess that depends on how much you hate normal computers. If you’re reading this web site though, my guess is you’re more interested in the Litl Easel because you’re wondering if it can be hacked to run Ubuntu, OS X, or Windows XP. After all, it does have a few interesting hardware features such as a display which can be folded to a 178 degree angle to let you use the laptop in a sort of picture-frame mode and a GPU which can handle HD video and HDMI output.

You can find the CrunchGear video below.

4 replies on “Litl Easel webbook gets video demo: Still not worth $699”