Chinese companies have released a number of tiny devices designed to let you run Android apps on your TV over the past year or two. Some of the best models feature Rockchip RK3188 ARM Cortex-A9 quad-core processors — and if Android isn’t your cup of tea, hackers have been running Ubuntu and other Linux-based operating systems on RK3188 devices for months.

Developer Ian Morrison has released a new tool called the Linuxium Bootloader which makes it even easier to boot Linux (or Android) on one of these devices. 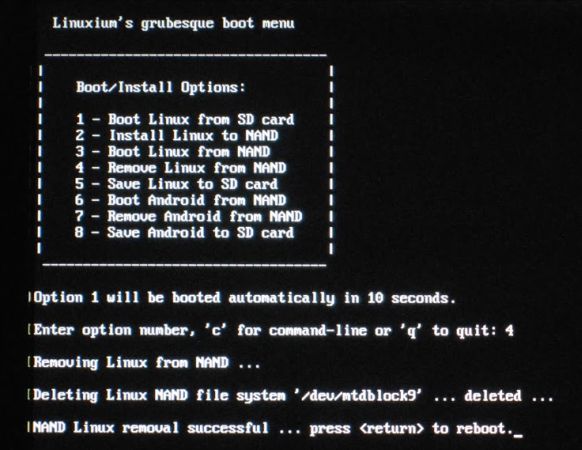 Linuxium Bootloader is a GRUB-like tool that can check for available software and give you a set of appropriate options every time you boot a device like the Rikomagic MK802 IV or Tronsmart T428.

For instance, if you have a microSD card that’s been prepared with Linux, the bootloader will give you the option of booting Linux from that card or installing Linux to the built-in storage of your device so that you don’t need to use the microSD card in the future.

It can do the same thing with an Android SD card. Or if Android or Linux are already installed on internal storage, Linuxium Bootloader gives you the option to boot or remove that operating system or save it to a microSD card.

While the bootloader can make it easier to perform those actions, that’s not the same thing as easy… you should read Morrison’s instructions carefully before getting started, and be aware that if something goes wrong, there’s a chance you could end up with a device that won’t boot.

The safest way to run Ubuntu on a mini PC with a Rockchip RK3188 is probably to buy one that comes with the operating system pre-loaded. Rikomagic offers an MK802 IV LE which already runs PiCuntu, a custom version of Ubuntu. The company also plans to offer an MK902 LE with additional USB ports, an Ethernet jack, and a camera.