Pine64 has been working on an official keyboard accessory for the PinePhone for most of the year. It’s gone through multiple hardware revisions in that time, but it’s finally almost ready to ship and you’ll be able to order for $50 starting next month. For that price, you can effectively turn Pine64’s Linux-friendly smartphone into a pocket-sized Linux laptop.

In other recent Linux Smartphone tech news, a hacker figured out how to speed up the eMMC storage on PinePhones. There are now instructions for doing the same thing yourself… just keep in mind that it involves hacking the hardware as well as software, so there’s some risk. Meanwhile the Sxmo user interface for mobile Linux devices is now available with Wayland, and more phones and tablets will likely be able to run operating systems with mainline (or near mainline) Linux kernels soon.

The PinePhone Keyboard will be available in December for $50, allowing you to use Pine64’s Linux phones like tiny Linux laptops. The final design includes improved keycap labels, responsiveness and a fix to prevent electrical damage. 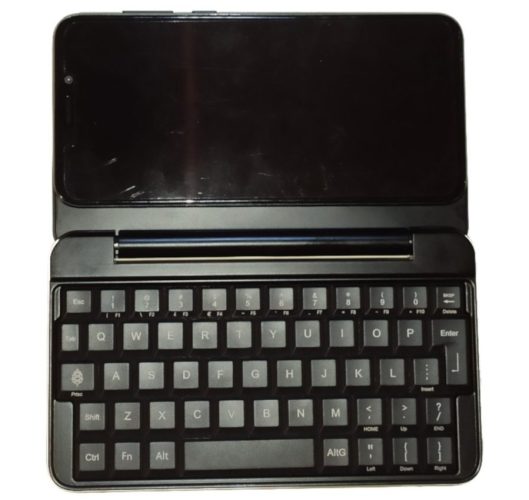 The PinePhone ships with an eMMC storage module that should theoretically be capable of data transfer speeds as high as 125 MB/s, but due to the power supply voltage it’s limited to about 55MB/s for most PinePhone models that have shipped (or 80MB/s for the PinePhone Braveheart edition that went out to early adopters).

But it turns out you can modify a PinePhone to speed up the storage. Unfortunately it cannot be done with software alone, and requires de-soldering and re-soldering components, so proceed with caution if following these instructions.

This post from developer Federico Amedeo Izzo spells out more details about the Vccq mod, including how this method was discovered and tested. One thing to keep in mind is that if you do perform this modification, you will only be able to run operating systems from the eMMC storage if they have the proper Device Tree settings, so you’ll also need to either run an OS with the proper Device Tree Overlay applied, or add it to the OS of your choice.

And here’s a short demo video showing a PinePhone after the eMMC speed modification had been applied.

Here is a video of a PinePhone 1.2 32GB with Vccq mod pic.twitter.com/C09lVVQrCp

The upcoming PinePhone Pro will have even faster storage, plus a significantly faster processor and a number of other upgrades. While Lukasz Erecinski is employed by Pine64, he’s also one of the first people to get their hands on a developer prototype and has shared some initial impressions about speed, performance, heat dissipation, and more.

This simple, lightweight user interface for mobile Linux distributions has a higher learning curve than Phosh, Plasma Mobile, or Lomiri, but it’s also one of the fastest, especially on low-end devices like the PinePhone.

Up until recently Sxmo has used the dwm window manager and Xorg display server. That’s still an option in version 1.6.0, but Sway is the new default window manager, and it’s running on Wayland. The Sxmo team says this brings improved performance to the virtual keyboard, Megapixels camera app, and video playback in the Firefox web browser. There’s also now support for Waydroid, which allows you to run Android apps on Linux devices.

Got PostMarketOS with SXMO running a few moments ago. I didnt think a tiling WM would work well on a #pinephone. Color me impressed! Can’t wait to start tinkering!#Linux pic.twitter.com/4qywZvz58g

Another Xiaomi device platform is getting Linux support [TuxPhones]

The Xiaomi Redmi Note 7, released in 2019, has a Qualcomm Snapdragon 660 processor and LPDDR4 RAM. It will soon be able to run mobile Linux distributions with a mainline (or near mainline) Linux 5.15 kernel.

Linux 5.16, meanwhile, should bring support for the newer Snapdragon 690 mid-range processor, opening the door to running Linux on more phones and tablets that are currently shipping with Android.

Want to read even more recent news related to Linux on mobile devices? Check out the latest weekly update from LinMob… or come back on Wednesday for this week’s roundup.

You can keep up on the latest mobile Linux news by following @LinuxSmartphone on Twitter and Facebook.