PostmarketOS is a free and open source, Linux-based operating system designed for smartphones. Originally developed as a project to extend the lifespan of old phones by letting you replace Android with Linux, the operating system also runs on new phones designed for Linux including the PinePhone and Librem 5.

But while there are plenty of desktop apps designed for GNU/Linux, the selection of mobile apps is a lot smaller. 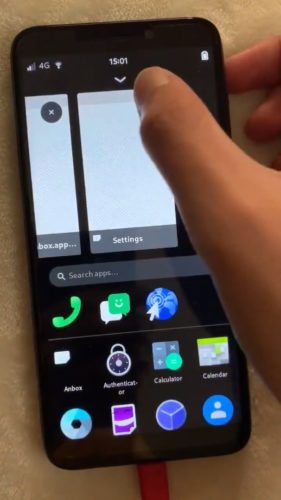 Now it looks like they’ve met their goal — TuxPhones reports that the “Anbox support” ticket in the project’s issue tracker has been marked as closed, with the last update coming two weeks ago explaining that “Anbox is merged into both Alpine and pmaports,” so it’s time to mark the issue as closed — with any upcoming improvements or bug fixes to count as new issues.

While Anbox makes it possible to run Android apps on a Linux phone, there are some limitations:

You may be able to circumvent some of those issues by sideloading Google Play Services and the Play Store, but I’m not sure if that’s been tested on phones running postmarketOS yet.

But if you want to see what things look like so far, Nikhil Jha did recently post a short video of a PinePhone running Android… inside of postmarketOS. Spoiler alert: it works, but it’s slow.

Running #Android apps in @postmarketOS on @thepine64 #PinePhone. This was already working but I haven’t seen a video of it so… here you go 🙂 pic.twitter.com/5ztatzKpdz