The GPD Pocket 2 is a tiny laptop computer with a 7 inch display, a QWERTY keyboard, and a clamshell design. It has a full HD display, an Intel Core M3-7Y30 processor, and the prototype GPD sent me to review features 8GB of RAM and 128GB of storage.

The handheld computer is up for pre-order through an Indiegogo campaign for $529 and up, and the little PC is set to ship in October.

When it does, it’ll come with Windows 10 Home pre-installed. But that doesn’t mean it’s the only operating system that you can run on the computer.

I already took a look at Ubuntu in my initial preview of the GPD Pocket 2. But I’ve gotten a few questions about other operating systems, so I decided to give Fedora and Debian a try as well. The results are mixed.

How to boot from a flash drive

The first thing you’ll need to do is prep a USB flash drive using UNetbootin, Rufus, or a similar tool that lets you convert a downloaded liveDVD ISO file into a bootable USB flash drive. 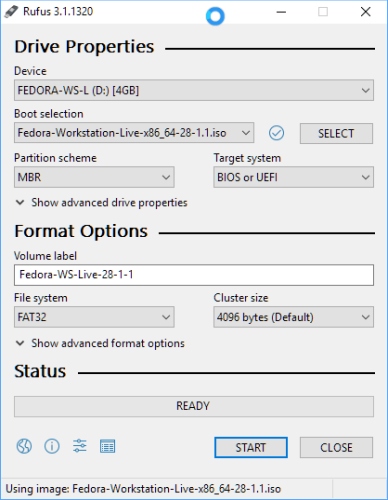 Then all you have to do is insert the drive into one of the USB ports on the GPD Pocket 2, turn on the computer, and hit the Fn+F12 keys as soon as you see the GPD logo. 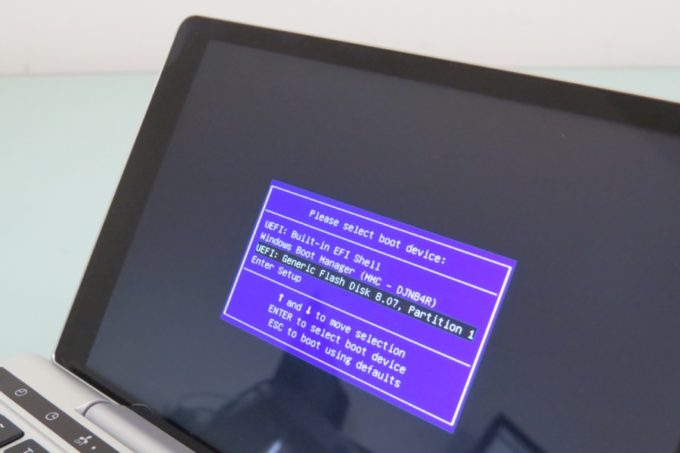 If everything works properly, you should see a boot menu that asks if you want to use the Windows boot manager or boot from the flash drive you just plugged in. Use the arrow keys to scroll down to the flash drive, hit enter, and you should be good to go. 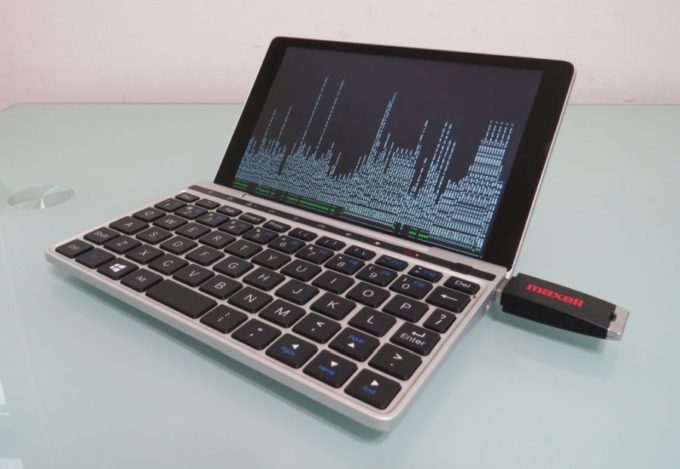 Then just follow any on-screen instructions to load the operating system of your choice into memory. Doing so shouldn’t overwrite Windows unless you choose a method that says “install.” So when you’re finished, you should be able to shut down the computer, remove the flash drive, and boot into Windows as if nothing ever happened (although you may notice that your data and time settings need adjusting).

Note that you may need to hit Fn+F12 a few times for this to work. If you accidentally boot into Windows 10 instead, just power down the computer and try again.

Oh, and if you want to get into the UEFI/BIOS settings instead of the boot menu, you can just hit the Del key during startup. There aren’t a lot of settings you can change, but you can enable or disable secure boot and change the boot priority order.

I should also point out that you’ll need to make sure your download an ISO that’s compatible with x86 or AMD64 architecture. And even then, there’s a chance that some disk images may not work.

But I was able to run Ubuntu 18.04, Debian 9, and Fedora 28. Some worked better than others using the default settings. I did not install any of these operating systems to the built-in storage and didn’t do very much to alter system settings, so I don’t have much to say about performance, battery life, or long-term usage, but I wanted to at least see what the out-of-the-box experience was for each operating system.

The first operating system I tried was also the one that worked best. Ubuntu loaded quickly, allowed me to connect to a WiFi network, and all of the hardware seemed to be recognized.

I was able to launch the Firefox web browser, play a video on YouTube, and listen to the sound playing through the speakers. 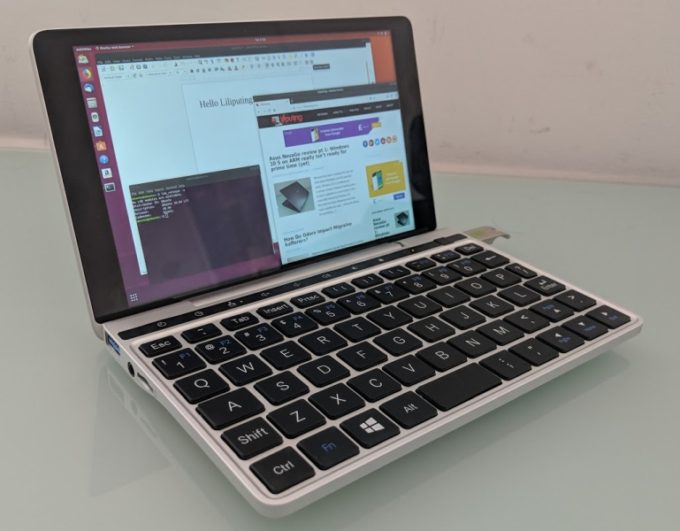 The touchscreen recognized taps, long-presses, and swipes. And the optical touch sensor worked like a tiny little touchpad. The left and right buttons allowed me to click. And the volume and brightness keys adjusted the audio level and the screen brightness.

Pressing the fan button also silenced the computer’s fan and turned on the green LED indicator light to let me know that the fan was off.

There were a few problems though. The first is that when you first launch the operating system the display will be sideways.

In order to resolve this, I just hit the Windows key, typed “terminal” into the search box to open a terminal window, and then typed the command “xrandr -o right” (without the quotes) to rotate the display from portrait to landscape orientation.

The second issue is that the default display scaling seems to be set to 100 percent. Since the Pocket 2 has a 7 inch, 1920 x 1200 pixel display that means text, icons, and graphics are very, very small.

I was able to increase the font size and the size of the mouse pointer by opening the Universal Access options and playing around with the settings. But I think I’d need to do a little more digging into Ubuntu 18.04’s configuration options to figure out how to adjust the DPI settings in a more universal fashion.

Still, Ubuntu 18.04 didn’t have either of the show-stopping features that I ran into with the other Linux distributions I tested.

The first time I tried Debian, I made the mistake of testing the default image that you’re prompted to download from Debian’s download page. Unfortunately, this image doesn’t include any proprietary drivers, which led to the device’s WiFi hardware not being detected out of the box.

It turns out there’s an easy fix: use a “non-free” disk image. You can find downloads for Debian 9.5 with non-free drivers and a choice of desktop environments including GNOME, MATE, Cinnamon, KDE, Xfce, and LXDE at the Debian website.

Just like Ubuntu, Debian loaded quickly and booted a desktop that looked sideways.

Again, I hit the Windows key, typed “terminal” and enter to open a terminal window, and then used the “xrandr -o right” command to rotate the display. 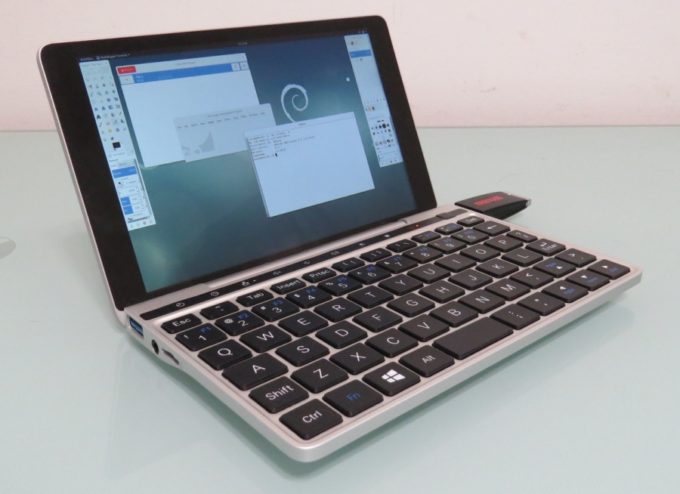 Unfortunately this time there was one key piece of hardware that wasn’t supported out of the box: WiFi. Interestingly, Bluetooth was detected.

Anyway, since I wasn’t able to get online, I didn’t bother installing apps, streaming video, or performing many other tests. But I did fire up a few apps and everything seemed to work fine.

Odds are that you could use a USB WiFi adapter to get online. And I suspect more advanced users would probably be able to figure out why Ubuntu recognizes the Pocket 2’s WiFi adapter and Debian doesn’t… and use that to get online using Debian 9. Ubuntu is based on Debian, after all.

But after confirming that GIMP, LibreOffice, and a few other apps worked… and that the text and graphics were still rather tiny, I decided to try something a little different.

When I realized that all I needed to do to get WiFi working was to download a disk image with non-free drivers, I grabbed a GNOME + nonfree disk image and tried again.

This time I was able to boot into Debian, connect to the internet, surf the web, stream videos, and do just about everything you’d expect to be able to do with a modern desktop operating system. 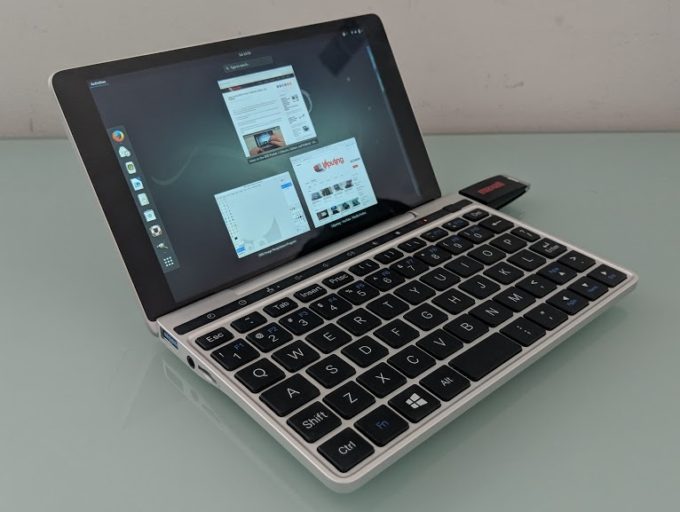 I still had to manually rotate the display. And while the screen brightness keyboard shortcuts worked, the volume keys did not.

If you start with a free software-only version of Debian and want to add non-free drivers, you can do that… but it’ll probably involve connecting to the internet using a USB WiFi adapter since the GPD Pocket 2 doesn’t have an Ethernet jack. So you’re probably best off starting with a disk image that supports WiFi out of the box.

This is the operating system that took the longest to boot, but when it did I was pleasantly surprised to see that scaling seemed to be set to 200 percent. Text, graphics, and everything else looked great. I didn’t need to squint to see anything and I didn’t need to adjust any font or display settings.

But… the display orientation was still stuck in portrait mode. And this time there was nothing I could do about it. 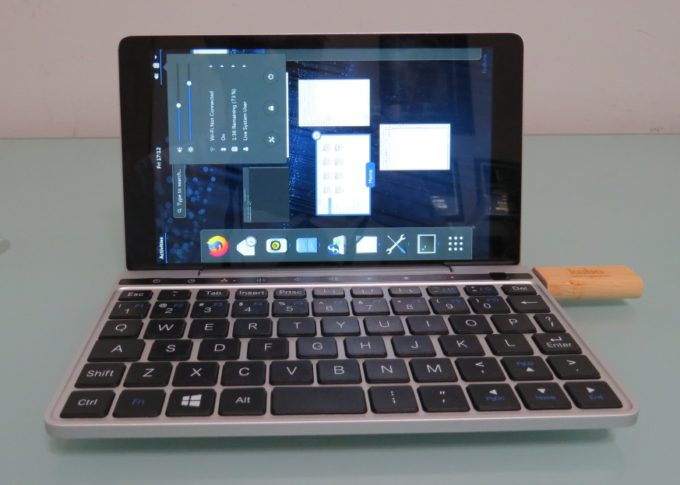 I tried the “xrandr -o right” command and I got an error message (I’ve since been told its because Fedora uses the Wayland display server rather than xserver).

So next I opened Fedora’s display settings and tried to change the display orientation that way. Nothing happened.

When I open the same disk image in Virtualbox I can go into the display settings, change the orientation, and then an “apply” button will appear in the top right corner letting me save the settings and rotate the screen. When I do the same thing on the Pocket 2, the “apply” button never appears.

WiFi, Bluetooth, the touchscreen, and sound all seemed to work just fine. But unless you plan to tilt your head to a 90 degree angle while using the computer, the out-of-the-box experience with Fedora 28 leaves a bit to be desired.

Again, I’m only looking at the default settings. It’s possible that advanced Linux users will be able to troubleshoot the issues I encountered. But so far the closest I’ve come to a non-Windows operating system where everything works the way you’d expect it to is Ubuntu 18.04.

Update: Thanks to advice from commenters on this post and on YouTube, I did manage to rotate the screen in Fedora… but in order to do that I had to switch from the Wayland display server to Xorg display server. That makes it easy to rotate the display, but all the text and images look smaller, just as they do on Debian and Fedora.

FYI, in order to switch display servers when running from a LiveUSB I had to:

If you install Fedora to the built-in storage, you’ll probably only have to follow most of those steps once. From then on, every time you login, you should boot to the last desktop environment you’d used.

I couldn’t get it to boot at all.

35 replies on “Linux on the GPD Pocket 2 (Ubuntu, Debian, and Fedora)”