The GMK NucBox is a tiny computer that fits in the palm of your hand, but which is a full-fledged desktop computer with a 10-watt Intel Celeron J4125 quad-core processor, 8GB of RAM, and a 128GB SSD.

It ships with Windows 10, and when I reviewed a pre-release version of the NucBox this summer, I focused on Windows performance… because I couldn’t get the demo unit GMK sent me to boot into Ubuntu or any other GNU/Linux distribution.

Now that the NucBox is available for purchase through retail channels for about $200, GMK sent me retail version of the little computer. And this time I had no trouble booting and installing Ubuntu 20.04 LTS on this 2.4″ x 2.4″ x 1.7″ computer.

Here are some thoughts. 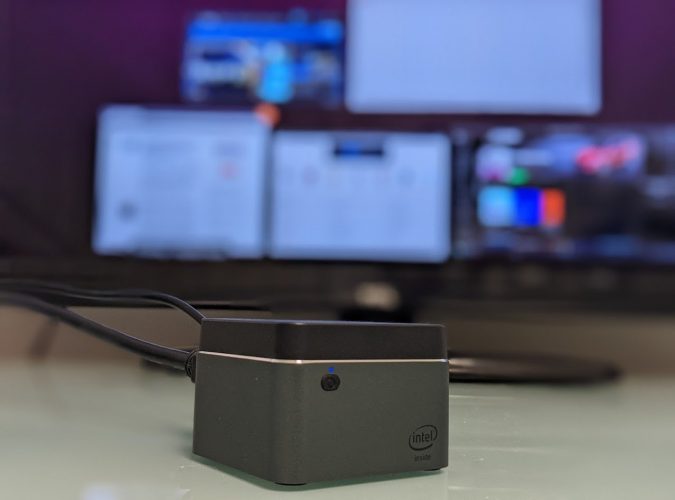 Installing Ubuntu or another Linux distro is pretty simple. Just prepare a bootable USB flash drive, plug it into one of the USB 3.0 Type-A ports on the back of the NucBox, and press the power button to turn on the computer.

Hit the Esc key on your keyboard to enter the UEFI/BIOS screen, and you should be able to navigate to the Save & Exit tab, scroll down, and find your flash drive in the Boot Override section. Select that drive and you’ll bypass Windows and boot from your flash drive, giving you a chance to try out the operating system without installing it to the computer’s SSD. 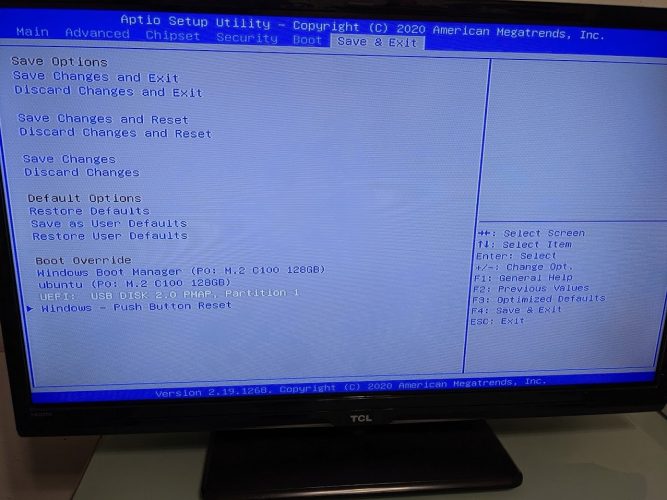 After having good results with my test drive, I went ahead and installed Ubuntu, and now I have a dual boot system: every time I turn on the PC I’m greeted by the GRUB bootloader, which gives me the option of loading Ubuntu 20.04 or Windows 10. If I don’t choose, it will automatically run Ubuntu after a few seconds.

Once the OS is up and running, everything seems to work as it should. I had no problems connecting to my wireless network over an 802.11ac WiFi connection. I was able to use a Bluetooth mouse with the computer. Audio and video playback work, and I was able to stream 1080p video from YouTube without difficulty.

The NucBox does struggle with 4K video streaming from YouTube. And when I say struggle, I mean it’s practically unwatchable. But I’ve had mixed results with 1440p content. 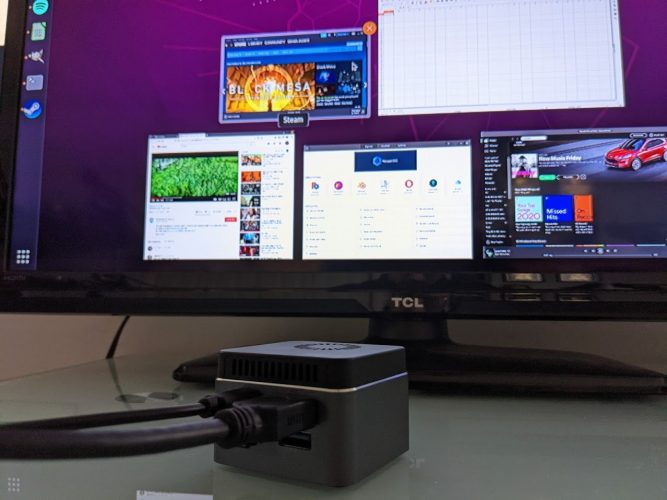 With an Intel Gemini Lake Refresh low-power processor featuring four CPU cores, four threads, and Intel UHD integrated graphics, the NucBox isn’t exactly supposed to be a speed demon. If you’re looking for a gaming rig or a workstation for video editing and graphic design, this isn’t the computer for you. But that’s probably true of pretty much any computer in this price range… and it’s certainly true of any computer this small.

But the NucBox was able to at least run every app I threw at it, including commercial software like the Steam game client and Spotify music player and open source software like LibreOffice and GIMP.

I spent about four hours using the NucBox with Ubuntu as my primary work computer, which meant plugging it into a 2560 x 1080 pixel display and opening a dozen or more browser tabs to research and write articles, doing some light image editing and video viewing. 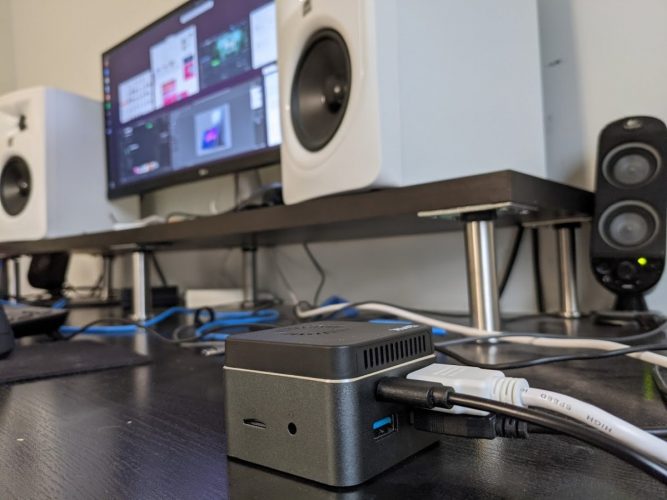 Firefox felt a little faster than Chromium, so I used that as my web browser for this test. And I used GIMP for image editing. Just to push my luck a bit, I used Spotify to stream music while working. And the NucBox was able to handle all of those things at once… It could do everything I asked of it, but it took slightly longer to get things done than I would have liked, particularly when opening new apps or browser tabs.

But that’s the same slight lag I felt when doing the same thing with Windows 10. For the most part, Ubuntu seems to run almost as well as Windows (3D gaming frame rates seem to be a bit lower, suggesting that the graphics driver could maybe use some work). But overall, I’d say that the NucBox is better suited for single-tasking or light multitasking than the sort of heavy-duty multitasking I was asking it to do.

Keep in mind that while the computer is small, it’s not silent. There’s a small fan inside the case that spins up and emits a high-pitched whining noise when the system is under load. This helps keep the system cool and it’s not very loud. But if you’re planning to use the NucBox as a media server, you might not want to put it too close to the place where you’ll be sitting unless you plan to play music or movies at loud enough volumes to drown out the fan noise.

Another thing to keep in mind is that while the computer’s SSD is replaceable, the processor and RAM are not. The NucBox does have a microSD card read that you can also use for removable storage, as well as a headphone jack, HDMI port, and two USB 3.0 Type-A ports. The computer’s single USB-C port is only used for power and not for data.

Update: I also decided to take LibreELEC for a spin on the NucBox. The lightweight Linux distribution is designed around the Kodi media center, and when it comes to using it with the NucBox, the operating system loads quickly and is capable of handling 4K video playback from local storage or while streaming from a network share drive over an 802.11ac WiFi connection.

Here’s a run-down of the little computer’s key specs:

You can find more details about the hardware, benchmarks, and Windows performance, among other things, in Liliputing’s GMK NucBox review.

The GMK NucBox is available for purchase from GMK or Amazon: