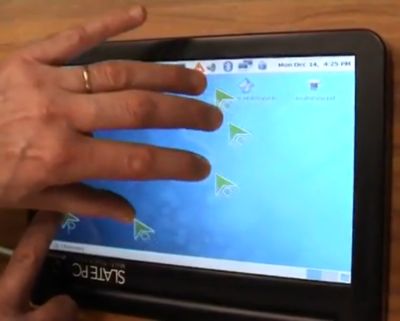 Thinking about picking up one of those newfangled multitouch displays for your netbook, but holding off because you’re worried that there won’t be support for multitouch gestures under Linux? It looks like there’s nothing to worry about.

While most versions of Windows 7 (but not Windows 7 Starter) include built-in support for multitouch screens, most Linux distributions don’t yet include support these displays. But that doesn’t mean you can'[t configure them to support it. The folks at France’s ENAC Interactive Computing Lab have put together a video demonstrating multitouch support on a PC running Fedora 12 Linux with what appears to be a 10 inch touchscreen display. You can check out the video after the break.

In order to emulate these results, you’ll need the Linux kernel 2.6.31, a modified version of X.org 1.7, and supported hardware and drivers. So we’re not quite at the point where you can just pick up a netbook with a multitouch display, install Fedora or another Linux distro, and expect to tap your way to bliss with up to 10 fingers on the screen. But we’re getting closer.