There’s a major update to the Linux kernel released once every 70 days or so. If you’re using a Linux-based PC that’s probably good news, since you can look forward to new features and improved hardware support pretty frequently.

But if you’re building an Android device, you’re probably going to look for something a bit more stable, which is why Android phones and tablets tend to ship with a Linux LTS (Long Term Support) kernel, which receives 2 years of support.

Even that isn’t really very much though… since it takes a while to develop the software for an Android phone, so that LTS kernel is usually near the end of its support lifecycle by the time a phone ships… which means Google and its hardware and software partners are on the hook for providing support. That’s one of the reasons some phones receive few, if any software updates over time.

Now Long Term Support is being extended from 2 years to 6… which could theoretically mean better long-term support for Android devices.

Ars Technica notes that Google’s Iliyan Malchev announced the change during a presentation at the Linaro Connect 2017 conference, and the move was confirmed on Twitter by Linux kernel LTS maintainer Greg Kroah-Hartman.

The first LTS kernel to get 6 years of support is Linux kernel 4.4, which is supported by the Qualcomm Snapdragon 835 processor.

Assuming it continues to take Google, chip makers, and device makers close to two years to take a device from planning to release, now those devices will received about 4 years of additional support from the Linux community, which means that Google and its partners won’t be on the hook for continuing to maintain kernel updates on its own in order to continue providing security and feature updates.

Malchev says that means instead of offering 1-2 major OS updates, that means device makers could offer up to 4 major updates. In other words, buy an Android O phone, and it may eventually receive updates to Android P, Q, R, and S before it reaches end of life. 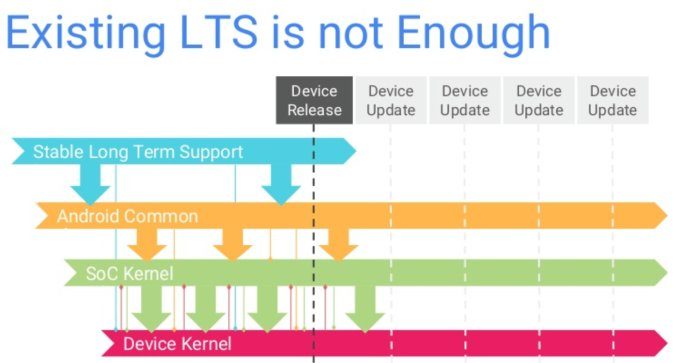 Right now you’re lucky if you get one or two updates (there are still phone shipping with Android 6.0 Marshmallow with no signs of an update in sight).

It remains to be seen how this will actually shake out. I suspect it will mean good things for Google Pixel phones. Today Google promises 2 years of OS updates and 3 years of security updates for Pixel phones (with the clock starting on release day). Maybe those numbers will eventually be doubled.

As for third-party phone? I wouldn’t be surprised if at least some phone makers decide that since customer are already used to spending money on a new phone every 2-3 years, there’s little reason to continue updating old devices, even if it is easier.

5 replies on “Linux kernel gets longer-term support, could be good new for Android devices”