The MK802 is a tiny computer that looks like a USB flash drive, and which ships with Google Android 4.0 and sells for around $80 or less. It’s designed to be something you can plug into a TV to surf the web, watch video, and play games on the big screen.

But over the past few weeks, we’ve also seen a number of Linux-based operating systems ported to the MK802. That’s because it’s very easy to load an operating system onto a microSD card and boot from that card. Pop it out and the MK802 will run Android again. 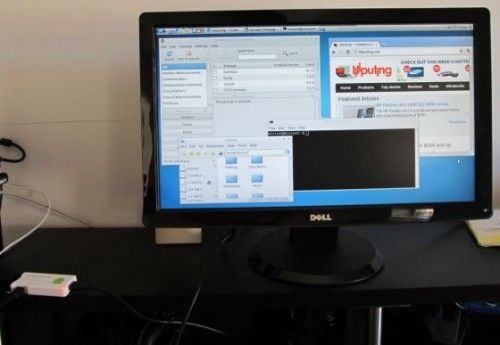 Software development for the MK802 is still in the early phases. There’s no Linux support for the Mali 400 graphics chip, for instance. But there are already a number of surprisingly useful versions of Linux that can run on the MK802, offering 720 and 1080p screen resolutions, support for Firefox and Chromium web browsers, office suites, and all sorts of other popular Linux software.

Basically, you can pick up an MK802 for $80 or less, plug in a TV, mouse, and keyboard, and you’ve got yourself a fully functional, low power computer that’s not particularly fast, but which also isn’t nearly as slow as you’d expect it to be.

The folks at the Rikomagic UK and Miniand forums have been working hard to port different Linux distributions to the MK802. These are all disk imagees which you can run from a microSD card.

Here are some of the Linux distributions that are currently available for the MK802.

Some of the disk images are prepared for MK802 Mini PCs with 512MB of RAM, and others for models with 1GB. If you try to use the wrong version for your device, you might notice garbled graphics on your display, making the operating system all-but unusable.

You can fix that problem using suzuke’s uboot switcher utility before preparing your microSD card.

If you want to switch between 720 and 1080p output, there’s a pretty easy method for doing that too.While using a 1080p screen resolution will allow more content to fit on the screen, and may work better with some monitors or televisions, some users are reporting that the MK802 performs more quickly when using 720p resolutions.

Update: There are also custom versions of Android for the MK802, including CyanogenMod 9 and Uberoid.