Now that Google is allowing users of (some) Chromebooks to run Linux applications alongside Chrome apps, there’s an odd side effect: it’s also easier to run some Windows applications.

CrossOver from CodeWeavers is a utility that adds a compatibility layer to Mac and Linux that allows you to install and run some Windows applications on those platforms. A few years ago the developers of CrossOver released an Android version that could run on Chromebooks that support Android apps.

But now that you can run Linux apps in a virtual machine on the Google Pixelbook, Josh DuBois from Codeweavers figured out how to get the Linux version of CrossOver up and running. The good news is that it supports some software that won’t work with the Android version. The bad news is that it’s still not that easy to install. 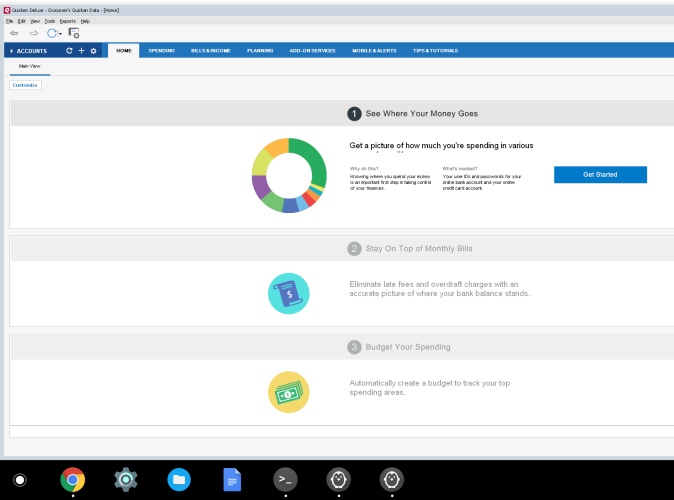 Linux app support for Chromebooks is still very much a work in progress. Among other things, DuBois notes that he had to install the wget utility before he could even download CrossOver. Once he did that, he needed to install python-dbus and python-gtk2 before the program would load.

And once CrossOver was installed, he could only launch it from a terminal window, because there’s no icon in the launcher.

That said, after jumping through a few hoops, DuBois was able to get the Windows desktop version of Quicken to run on the Pixelbook, something that wouldn’t be possible using the Android version of CrossOver.

While the new Linux features on Chromebooks are clearly aimed at developers and early adopters for now, this little experiment shows that it’s at least conceivable that Linux support could make Chromebooks suitable replacements for Windows computers for folks that have just a few Windows apps they can’t live without.

On the other hand, there are still plenty of applications that CrossOver doesn’t support. I’ve personally never had much luck running QuickBooks in CrossOver or WINE, for example.