Developers have been porting Ubuntu and other operating systems to run on tablets and TV boxes with Rockchip RK3188 quad-core chips since mid-2013. The RK3188 chip is one of the fastest ARM Cortex-A9 processors around, and Ubuntu is surprisingly snappy on devices with the processor… but up until now there’s been no Linux support for hardware-accelerate graphics.

That means that while web browsers, office apps, and other basic software run well on a device like the MK802 IV LE, up until now it’s been tough to play 3D games or run some other apps using Linux on this type of device.

Now a group of developers have added initial support for hardware-accelerated graphics. 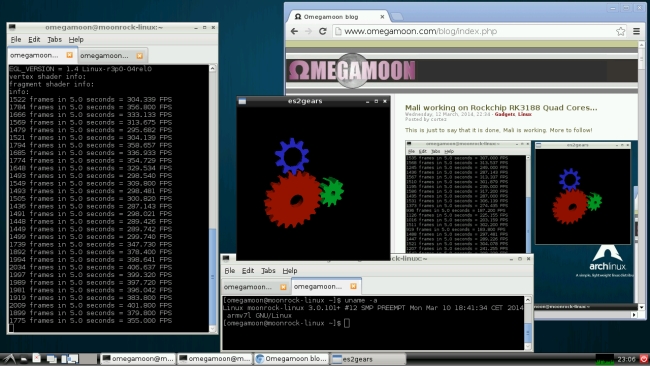 The RK3188 processor uses an ARM Mali 400 graphics processor, and there’s an unofficial open source driver for that technology.

Developer Omegamoon has posted a few pictures showing that it’s now working on devices with RK3188 chips, while developer Naoki FUKAIMI has gone a little further by posting instructions for building a working graphics driver for a Radxa Rock developer board with the RK3188 CPU.

Right now it takes a bit of technical know-how to get everything up and running. Hopefully in the future there will be easy-to-install builds of Ubuntu and other operating systems available for download, making it easier for novices to load a much more functional desktop operating system on a cheap Android TV device.

Update: That didn’t take long. Ian Morrison has created a version of Ubuntu 12.04 with working support for hardware-accelerated graphics on devices with RK3188 chips and Mali-400 graphics. You can find download links and instructinos at his Google+ page.

Android TV sticks and TV boxes with the processor sell for around $40 to $100 at AliExpress.