Linspire is a Linux distribution that’s designed to be easy for Windows users to learn. In fact, the original developers used to call the operating system Lindows, before changing the name.

It’s been more than 10 years since the last version of Linspire was released… but a new version is out this week. Kind of. 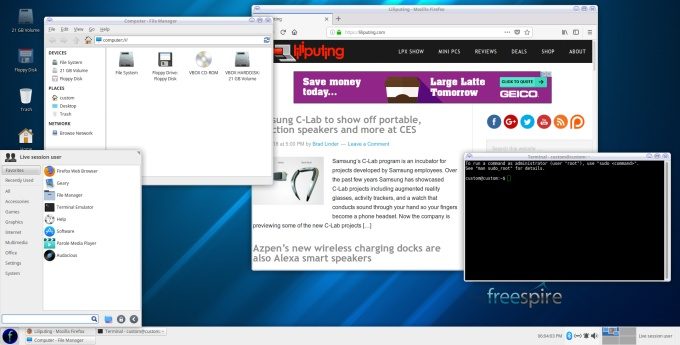 The new version of Linspire comes from PC/OpenSystems LLC, which acquire the rights to the name, and not much else.

Linspire 7.0 isn’t based on the code for the older operating system. Instead, it’s a fork of Ubuntu Linux that comes with a set of open source and proprietary software pre-installed, including Google Chrome, Wine (for running some Windows apps), VLC, and perhaps most importantly, long term support. Linspire 7.0 will be supported until 2025.

The operating system does have something in common with its namesake though: it’s a commercial OS. You’ll have to pay $80 for a license, which gets you 12 months of email and phone support as well as some other perks and all updates released for that version of Linspire, but a license is only good for this version of the operating system. You’ll need to pay again if you want Linspire 8.0 or any other major release (if and when they become available).

There is also a free and open source version of the operating system called Freespire. Version 3.0 is out this week, and it lacks some of the software and all of the priority support that comes with the paid version. But it’s probably worth checking out before spending $80.

Linspire and Lindows before it never quite lived up to its promise, and desktop Linux has come a long way in the decade that this project has been dormant. So starting over with an Ubuntu-based operating system probably isn’t the worst idea in the world. But I do wonder how big a market there is for an $80 operating system that basically does what free software like Ubuntu can do with a bit of extra support when you could pay just a little more and get a Windows 10 license.

PC/OpenSystems does have some experience in the Linux distribution space. The company is already responsible for the Black Lab Enterprise Linux operating system, which will continue to be offered separately.

via Phoronix and DistroWatch

9 replies on “Linspire rises from the dead (in name only)”