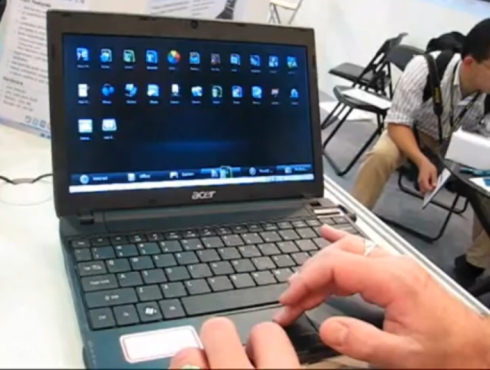 The first Acer netbooks to hit the market in 2008 were running Linpus Linux Lite, a custom Linux distribution optimized for small screens. While you don’t see many Linux netbooks anymore, the folks at Linpus haven’t given up on the mobile space, and they’re showing off the latest versions of Linpus for netbooks and tablets.

That includes a new version of Linpus Linux Lite for netbooks with a completely retooled user interface, and a version that uses MeeGo technology.

Chippy at Carrypad caught up with Linpus at computex, and he shot a video overview of the three operating systems (Linpus Lite, MeeGo, and Slate editions), which you can check out after the break.

One area where Linpus has really changed things up is user customization. The new version of Linpus Lite makes it much easier to create home screen tabs for any category you like. If you want a whole tab filled with icons for games, you can do that. Linpus Linux Lite is available as a free download if you want to try it on your netbook, but the company is hoping to get it preloaded on new netbooks as well.

The MeeGo version of Linpus looks a lot like the standard version of MeeGo Linux I checked out a last week. Basically, Linpus software is running in the background, with the MeeGo user interface and processor optimizations running on top.

Linpus Lite Slate Edition wasn’t ready to show off when Chippy stopped by the Linpus booth, but a Linpus rep implied it could look a lot like the MeeGo tablet edition user interface we’ve already seen demonstrated at computex.