Back in 2008 when a significant percentage of netbooks were shipping with Linux rather than Windows, Linpus Linux Lite looked like a major player. Acer had tapped the folks at Linpus to design the OS for its first generation of 8.9 inch netbooks and the future was looking bright.

A year and a half later, more than 90% of netbooks are shipping with Windows XP or Windows 7 Starter Edition and Linux distributions such as Linpus and Xandros aren’t looking quite so exciting. Of course, that could change as smartbooks with ARM-based processors start to hit the market, since they’re not capable of running Windows. 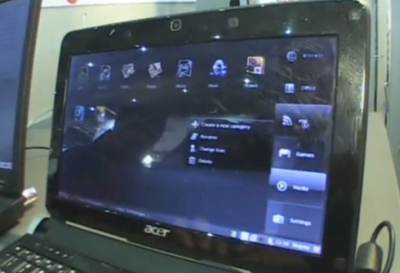 Anyway, if you’ve been wondering what Linpus has been up to, jkkmobile caught up with the company at CeBIT this week and shot a video overview of the latest version of the Linpus Linux Lite netbook operating system.

The user interface has been overhauled, and it’s easier to customize the tab-based program launcher. On the right side of the screen are a series of tabs for things like “Games,” or “Internet.” Click on a tab, and you can add icons for favorite programs in each category. You can now create as many tabs as you’d like, and re-order them by dragging and dropping.

Honestly, I think the UI makes more sense for a touchscreen device than a netbook with a keyboard and touchpad. But maybe we’ll see Linpus on one of the 15,000 upcoming iPad competitors one day.