It turns out Pegatron isn’t the only company pushing a netbook model based on a Freescale CPU. I ran across the LimePC booth at CES operated by China’s Tinsghua Tongfang Co. The LimePC platform combines a Freescale chipset and a custom version of Linux called LimeOS. The company is pushing a netbook (LimeBook), a small form factor PC (LimeBox), and an all-in-one PC (LimeView) as well as a 5.6″ UMPC (LimeNote). 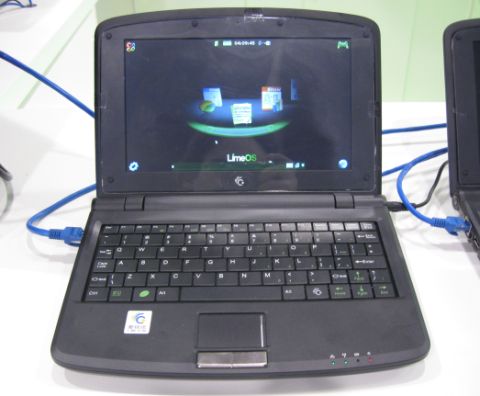 The products are already available in China, and the goal is to distribute them in the US, Europe, and other countries as well, either under the LimePC name or by partnering with distributors that may rebrand the computers or the operating system.

The OS is pretty basic, but it comes with software including a Firefox-based web browser, Gnumeric and AbiWord for editing spreadsheets and Word documents, and OpenOffice.org for handling presentations. There’s also a media player, email client, and VoIP software. Applications were a bit slow to launch, but fairly responsive once they were up and running.

I shot a brief video showing some of the applications and the program launcher:

The LimeBook netbook features a 7 or 8.9  inch display, 256MB or 512MB of RAM, and 4GB or 8GB SSDs, although the machine can also be customized with hard drives ranging from 30GB to 500GB. The goal is to sell the netbook for $199, which I’m guessing only govers the 4GB model with 256MB of RAM.

The netbooks also have an Ethernet jack, 2 USB ports, a mic input, headphone jack, and VGA output. WiFi and Bluetooth are optional. The LimeBook measures 9.9″ x 7.3″ x 1.3″ and weighs 1.9 pounds. I found the keyboard a bit awkward to use. The keys are a decent size, and the right shift key is located in the proper location to the left of the up arrow. But the spacing between the keys is pretty narrow, making it easy to accidentally press the wrong key until you get used to typing on the netbook.

The touchpad is also rather small, although the mouse buttons are nice and large.