But if you’re looking to save $220, here’s your chance to get one for free. We’re kicking off the Liliputing 2012 Holiday Giveaway with this quad-core tablet. 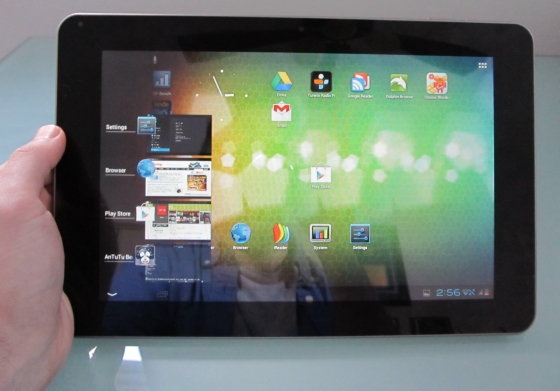 As I mentioned when I reviewed this Ampe A10, it’s not the fastest around, and the build quality and battery life leave a bit to be desired. But it’s as reasonably zippy device which scores about twice as high on most benchmarks as, say, a first generation NOOK Tablet or Amazon Kindle Fire.

This tablet also has some serious potential as a developer-friendly device, thanks to its Freescale i.MX6 processor. Freescale has released quite a bit of documentation for this chipset, which could help developers write better, or at least different software for the device, or port other Linux-based operating systems to run on the device.

CNX Software has a pretty good overview of some of the available documentation and tools.

This contest is for the exact same unit I reviewed recently. That means you get the same dead pixel and screen bubble I found.

A set of headphones and a micro USB to full sized USB adapter are included in the package.

Thanks to PandaWill for supplying Liliputing with this Ampe A10 tablet.