The global COVID-19 pandemic has had a weird impact on worldwide PC shipments. At the start of the pandemic, shipments fell due supply chain issues that began when Chinese factories shut down. Once production of PC components ramped up, computers flew off the shelves to meet strong demand from folks who were working from home.

Now demand is slumping again. According to Gartner and IDC, (which have slightly different methods for measuring these things), PC shipments in the fourth quarter of 2022 were down by 28.1% to 28.5% from the same period a year earlier. One part of the reason could be that many of the folks who were in the market for new computers already bought one in the past few years and don’t have any reason to upgrade yet. Another is that the global economy is in a precarious spot, which could be keeping individuals and businesses from investing in new hardware right now.

One upside for frugal shoppers is that IDC notes “average selling prices (ASPs) across many channels also fell” in the most recent quarter as PC makers and vendors were looking to spur demand. So if you are planning to buy a new PC soon, maybe you’ll be able to save a few bucks. Maybe. (A lot of the new models announced during CES last week seem to carry pretty high price tags).

PC Shipments Continued to Slump During the Holiday Quarter [IDC]

According to IDC, PC shipments were down 28.1% in the Q4, 2022 compared with he same period in 2021. Total shipments for 2022 were higher than pre-pandemic levels, but demand appears to be slipping. 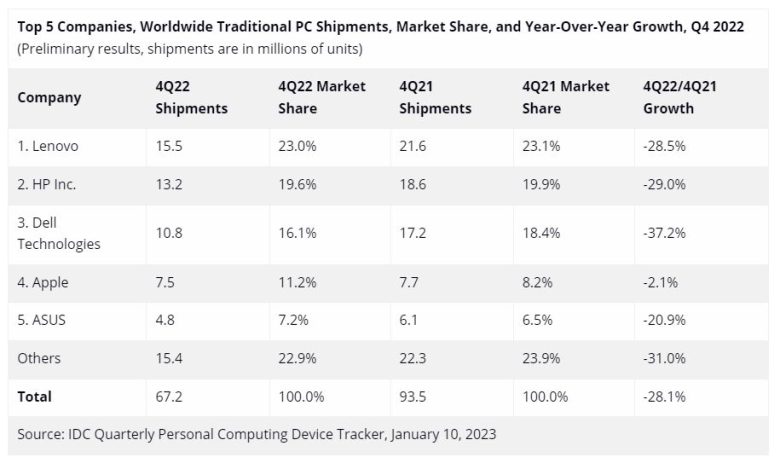 Gartner also reports that PC shipments fell by more than 28% year-over-year in the fourth quarter of 2022 and notes that this is the largest decline since Gartner began tracking PC shipments nearly three decades ago. 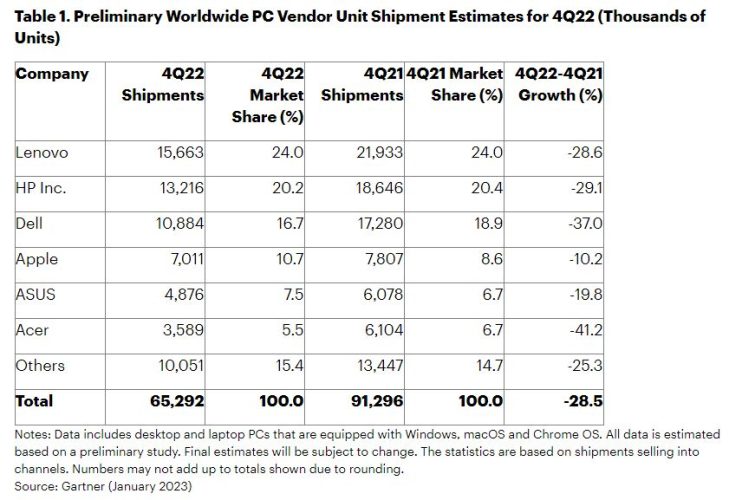 Apple is allegedly working on MacBook Pro laptops with OLED displays and/or touchscreen displays (something the company has long resisted adding, even as a growing number of Windows laptops ship with touch panels). They could arrive in 2025.

Microsoft 365 Basic will launch later this month for $2/month, offering 100GB of cloud storage, ad-free Outlook email on the web and mobile, email encryption, and malware scanning for email attachments. It’s cheaper than MS 365 Personal, but doesn’t include Office apps. And it’s the same price Google One charges for 100GB of storage.

Imagination Technologies launches IMG DXT graphics for mobile devices, with support for ray tracing, 50% faster single-core performance than the previous-gen, and up to 2.5 TFLOPS of FP32 arithmetic performance.

The Jetson Orin NX 16GB module at the heard of this system features a quad-core ARM Cortex-A78AE processor and a 1024-core NVIDIA Ampere GPU with 32 tensor cores and up to 100 TOPS of AI performance. The system is up for pre-order for $899 and it should begin shipping in March, 2023.