Demand for personal computers rose toward the beginning of the COVID-19 pandemic, as a growing number of people found themselves working and taking classes from home. But now it looks like demand is falling considerably.

According to a report from Counterpoint, shipments fell by double-digits between Q3, 2021 and Q3, 2022. Most top PC makers including Lenovo, HP, Dell, and Asus saw shipments slip… although Apple actually saw an increase, likely due to the company’s decision to launch new models late in the second quarter. 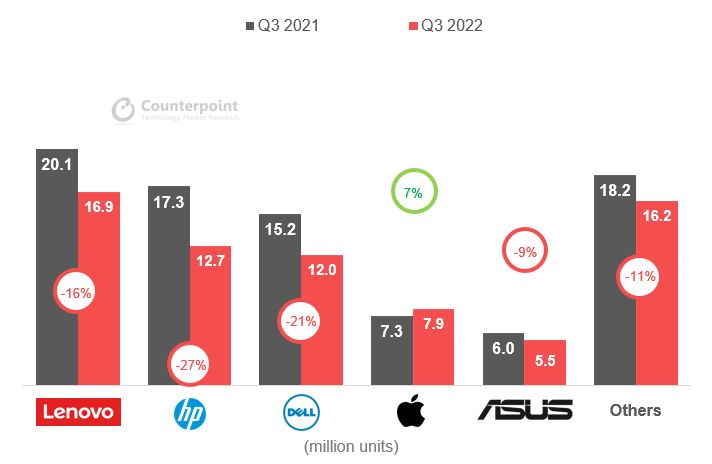 In other recent tech news from around the web, Amazon’s Fire TV Cube 3 is now available.. Apple’s new iPad and iPad Pro models are now shipping, with prices starting at $449 for the new 10.9 inch, 10th-gen iPad. Apple may be preparing a 16 inch iPad. The company has confirmed that an iPhone with a USB-C port is on the way (although it’s unclear if it will be available worldwide. The recently-launched Microsoft Windows Dev Kit 2023 mini PC has a user-replaceable SSD. And luxury phone maker Vertu has jumped on the web3/crypto/DeFi bandwagon.

PC shipments in the third quarter of 2022 were down 15.5% from the same period a year earlier, falling to just over 71 million units shipped. Counterpoint blames inflation leading to “demand weakness across both consumer and commercial markets.” https://t.co/sz5FrP42nQ

Report: Apple is working on an iPad with a 16 inch display. With a larger display than many MacBooks, and a similar processor, it’s really just the software and form factor setting iPads and Macs apart from one another. https://t.co/9XNSDPuZD8

The 3rd-gen Amazon Fire TV Cube is the first Fire TV device that actually lets your TV turn off automatically when the media streamer is in sleep mode, since it outputs no video signal at all (previous models put out a black video screen). https://t.co/JJjMVrU2pv

Apple VP Greg Joswiak has confirmed that Apple will comply with recently adopted EU rules and release iPhones with USB-C ports, although it’s unclear if they’ll be sold globally or just in the EU. https://t.co/Ym2axA8Rx2

Luxury device maker Vertu is trying to cash in on crypto with a METAVERTU phone with a crypto wallet and a bunch of “web3” type buzzwords in the marketing. It sells for $3600 and up. https://t.co/UotLbFjexL