Chinese company MangoPi made a bit of splash earlier this year by introducing a pair of tiny computer boards powered by RISC-V processors. Now the company is showing off a new computer-on-a-module that’s smaller than an SD card, but which packs four ARM Cortex-A53 CPU cores, supports Linux-based software, and can handle 1080p video playback at 60 Hz through an HDMI output (although you’ll need to connect a carrier board to get that HDMI port, since there are no ports on the module itself).

Details about the new module are light at the moment, but it appears to be called the “Linux-Box” and there’s a little more information at the MangoPi forum and on Twitter, which is how we know it’ll probably ship with an Allwinner H616 processor. 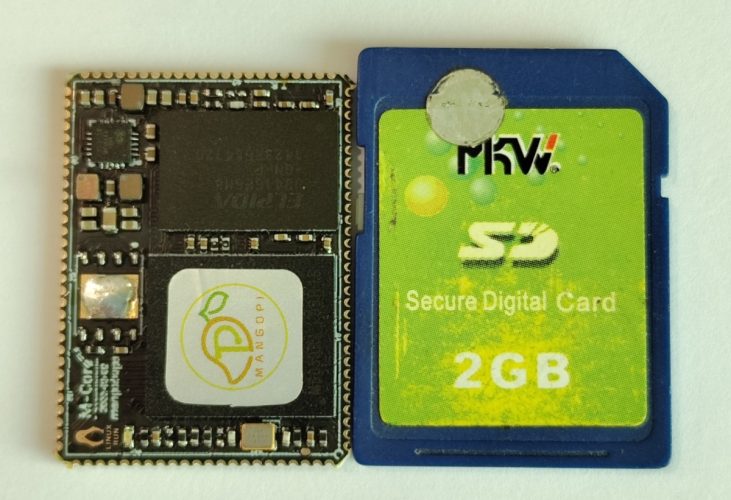 In other recent tech news from around the web, a hardware hacker has created a super-sized iPhone 13 Pro Max with a bigger battery, more ports, and dual cooling fans, a different hacker has created a Nintendo Switch Lite clone for retro gaming that’s powered by a Raspberry Pi Compute Module 4, HP has announced it’s purchasing a company known for making video conferencing, communication, and collaboration hardware, and Intel’s Core i9-12900KS desktop processor with top speeds of 5.5 GHz hits the streets next week.

MangoPi’s upcoming “Linux Box” is an SD card-sized computer module with an Allwinner H616 quad-core ARM Cortex-A53 processor and support for 1080p video. Needs a carrier board for traditional ports & connectivity though. https://t.co/JoOe2Lkyyq

The Retro Lite CM4 is a DIY handheld game console powered by a Raspberry Pi Compute Module 4 stuffed inside a custom shell designed to mimic the Nintendo Switch Lite. It has a 5.5 inch display, stereo speakers, aluminum body, and 4,000 mAh battery. https://t.co/UXpY0brq3d

This iPhone 13 Pro Max has been hacked to add USB Type-C and headphone jacks, 2X the battery capacity, and dual cooling fans which help bring better performance in benchmarks. Of course it’s thicker & heavier than most phones. https://t.co/JKbYhEjrRn

LinuxPhoneApps lists apps and games designed to run on Linux phones, with brief descriptions, compatibility ratings, and source code/repository links. Very handy for finding apps for the PinePhone, Librem 5, and other mobile Linux devices, but still a work in progress. https://t.co/ta2Z4FMvhH

Maui Shell Alpha release coming out soon.
Check out the previous Maui Shell progress report to get a hint of what’s coming to this Alpha release.https://t.co/lfSSCsL1m1@Nitrux_NX pic.twitter.com/sG4xydmlO2